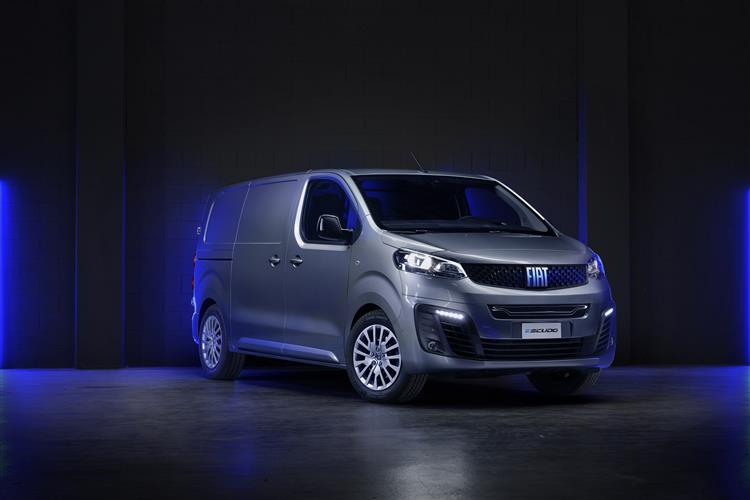 A change of name doesn't always mean a change of fortunes. Back in 2016, Fiat switched its mid-sized van range away from two generations of 'Scudo' branding, re-christening it the 'Talento' and basing it on a Nissan Renault Alliance platform. That model failed to make much of an impression on the market, so six years on, the Italian maker has switched back to the 'Scudo' nameplate and ditched the Renault underpinnings to create this Stellantis Group-engineered model. It shares almost everything, as you might expect, with the other Stellantis mid-sized vans in this sector, the Peugeot Expert, the Citroen Dispatch and the Vauxhall Vivaro, with the same design and engineering also used by the Toyota Proace. That does at least mean that everything you get here is thoroughly proven. Let's look in a little more detail at Fiat's spin on it.

All the engineering on offer here is familiar and proven from other Stellantis Group mid-sized vans. So, bolted to an EMP2 platform, there's the choice of conventional diesel or full-electric power. Things kick off with a 1.5-litre diesel, offered with either 100hp or 120hp, mated to 6-speed manual transmission. There's also a 2.0-litre Multijet diesel with 145hp and the choice of either manual or 8-speed automatic transmission. This 2.0-litre unit also comes in 180hp form, only with the 8-speed auto. If your business has moved on from smoky diesels, you'll be more interested in the two E-Scudo EV variants, both of which use a 136hp electric motor. Those whose deliveries are mainly urban-bound will be happy with the base E-Scudo model, which has a 50kWh battery that offers a range of 144 miles. There's also a longer range E-Scudo variant with a 75kWh battery pack that boosts that range to 205 miles. Whatever your powertrain choice, on the move drivers will appreciate the car-like driving position. And ride quality is a strong point, thanks to load adaptive variable damping shock absorbers, a system which varies the damping with the vehicle's ride height. Top-spec variants get camera-driven kit like speed limit recognition, lane departure warning, Side Blind Spot Alert and Driver Attention Alert systems. There's also a clever 'Intelligent Speed adaptation' system that enables you to maintain a constant speed at a cruise.

The Scudo offers modern looks and practical dimensions. The standard model is 5-metres in length, the longer Maxi version up to 5.3-metres. Under the skin sit the same EMP2 underpinnings as you'll find in the Peugeot Expert, Citroen Dispatch, Vauxhall Vivaro and Toyota Proace models that use the same design. To differentiate the Scudo visually, there's a redesigned front grille, complete with Fiat's latest brand badge, plus a restyled pair of headlamps. Inside, the efforts made to set this Fiat apart from its Stellantis Group LCV cousins are equally cursory, but operators won't mind that given the quality of the car-like cabin with its extensive soundproofing. There's quite a low seating position (for a van), with plenty of seat and wheel adjustment. As usual in this class, a three-person bench seat is fitted and there's a Moduwork bulkhead flap so that longer items can be pushed through from the cargo area. The dashboard is almost identical to that you'll find in the other versions of this design, which means that most functions are on the central touchscreen, though the climate controls are separated out below. That Moduwork feature also allows the passenger seat to fold forward so the backrest can lay flat to create a handy work surface. And a head-up display can be specified.

Like its predecessors, this Scudo comes in three configurations - Van, Crew Cab and Cab with platform. And there are three trim levels - 'SX', 'Tecnico' and 'Business'. There are four diesel powerplants and two full-EV powertrains. There's also a passenger-carrying version, the Fiat Ulysse. As you'd expect, the LCV range pricing broadly mirrors what you'll pay for this model's identically-engineered Stellantis Group mid-sized LCV cousins - the Peugeot Expert, the Citroen Dispatch and the Vauxhall Vivaro. For the combustion variants, think in terms of ex-VAT on the road figures in the £25,000-£35,000 bracket. For the full electric versions, think in terms of pricing in the £30,000-£40,000 bracket after subtraction of the government's Plug-in grant. All models are decently equipped, even base-spec variants including cruise control, a speed limiter and a DAB audio system with Bluetooth. Top versions have features like 17-inch alloy wheels, High beam assist, power-folding mirrors and front parking sensors.

Load volumes vary between 5.3 and 6.1m3 depending on the wheelbase and there's a payload capacity of up to around 1.2-tonnes. It's possible to poke longer items through to the cab thanks to a Moduwork system which offers a hatch behind the passenger seat which can be folded forward. Use this facility and items up to 4-metres long can be transported inside the vehicle in the lengthiest Maxi version. The Moduwork system can increase load volume by 0 5m3, meaning the Maxi version's total capacity can be extended up to 6.6m3. The Scudo has a towing capacity of 1 tonne. The load area is 2,512mm for the standard model and 2,862mm for the Maxi version and in both cases, there's 1.26 metres of width between the wheel arches. There's a maximum height of 1,397mm from floor to ceiling. The diesel units are amongst the more efficient in the segment - think around 40-45mpg on the combined WLTP cycle. But of course for real efficiency, you'd want the E-Scudo full-EV variants. These offer an AC charging capacity of up to 11kW - and up to 100kW in DC, to charge the largest battery to 80% in just 45 minutes.

Fiat vans have a much higher sales share in Europe than in the UK. For the Italian brand's slice of our market to increase, the company needs product quality in depth. Expect borrowed Stellantis Group engineering technology to provide that over the next few years and this third generation Scudo demonstrates just how useful this will be in extending the reach of the Fiat Professional LCV network. No, there's nothing really here that you couldn't also get from the Peugeot, Citroen, Vauxhall or Toyota versions of this same mid-sized design. But if for your business, a Fiat Professional garage is more convenient and offering a better deal, there's the peace of mind of knowing that you're buying your business a state-of-the-art product. In the mid-sized van segment, going for an Italian just got that bit more appealing.