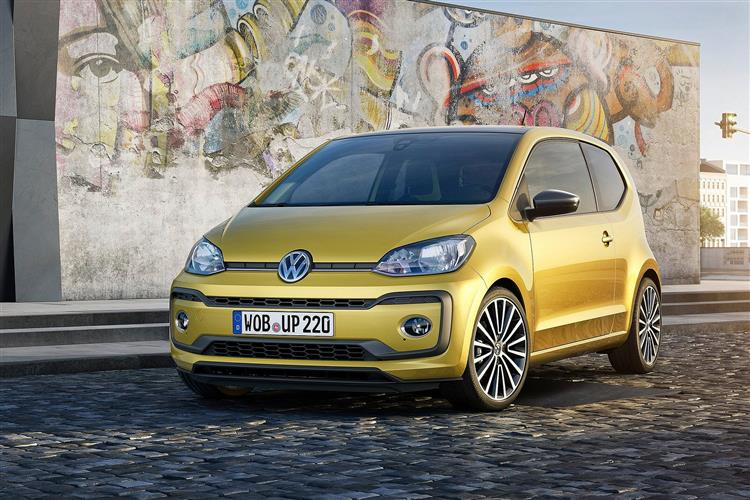 The improved Volkswagen up! is a presentable citycar with few frills. June Neary assesses its credentials.

Will It Suit Me?

There's something really rather charming about the Volkswagen up! I'm not sure if that's due to its unpretentious look and feel or whether it just seems to be resolutely indestructible but here is a car that would certainly be high on my list if I was looking for an inexpensive citycar that could genuinely soak up city abuse. It's now been usefully updated. Built in Europe rather than in Brazil like its Fox predecessor, there can be no doubt that the up! can handle the worst our road systems can throw at it. The interior isn't so basic that it feels LIDL-chic but neither is it something you'd get too precious about. Clean and functional is how I'd describe it.

Not too much has changed with the looks of this improved model. There are re-styled bumpers, a sleeker rear diffuser, door mirrors with integrated indicator lights, revised headlights with LED daytime running lights and smarter rear lights. Otherwise, it's as you were. You don't buy citycars if you need acres of space, although the up! is one of the bigger examples of its ilk. The tape measure even shows that the interior is larger in some key dimensions than the Polo, a car that campaigns in a class above. Volkswagen has managed to give the rear seats a certain degree of MPV-style flexibility. They fold 50/50 though there's no option for them to slide back and forth as was the case with the rear bench in the old Fox model which gave owners the choice between Golf class rear legroom or genuinely usable luggage space for a family of four. Still, the up! compensates by offering a five-door option for the first time on a VW citycar. And out back, if you open the glass tailgate apparently styled to look like a flat-screen TV, you'll find 251-litres of space or 951-litres with the seats folded. Up front, a cool dished three-spoke steering wheel fashioned from light magnesium frames an instrument cluster of refreshing simplicity. A pity though that it's only adjustable for height, not for reach. The interior design with its large speedometer is clean and easy to get to grips with, featuring high gloss back trim and a compact centre pod for many of the minor controls. True, there's no shortage of hard plastics, but this doesn't feel like a car that's been ruthlessly built down to a price. It just feels agreeably minimalist.

If there's another car that's more no-nonsense than the up! for sale today, I don't think I've driven it. Only the SEAT and Skoda versions of this design truly share this model's smart but minimalist approach. You just get in and go. All the controls are self-explanatory and feel solidly built. Visibility out of the car is good, the steering is well assisted for city driving and the manual gearshift is positive, slotting home with unerring accuracy. The 1.0-litre petrol engine can only summon 60PS, which isn't a whole heap, so you'll need to give the accelerator pedal a good prod if you want to step away from the lights quickly. On bigger roads, it can feel a bit frantic but then that goes with the small car territory. There's also a 75PS derivative and the improved range has also added in a 90PS 1.0-litre TSI turbo option too. The driving position is good and although the seats feel like budget items, they seemed extremely comfortable. In fact, I'd say they fitted my posterior rather better than the sports seats in the Golf GTI I'd been sampling. There are some audible thumps from the suspension over city potholes but the actual ride is good, the up! being quite softly sprung.

The up! looks good value for money - prices start from around £9,000 - but I must issue a warning. If, like me, you'd be using the car frequently in city driving conditions, you would most definitely want air conditioning. The entry-level 'Take up!' variant I tried didn't have it - for that, you've to fork out for the plusher 'Move up!' variant - or indeed the top 'High up!' model. This may be a deal breaker to those drawn to the entry-level up! model's low sticker price but who can't countenance the prospect of a sweaty back in summer. There's a choice of either three or five-door bodystyles and the option of a semi-automatic robotised clutch-less 5-speed gearbox as an urban alternative to the usual 5-speed manual. Bear in mind, as I've already suggested, that the bottom end of the pricing spectrum gets you a very basic car indeed, so most will want to find an extra £1,000 to get themselves into mid-spec 'Move up!' trim. Across the range this time round, there are new exterior colours and a range of roof, design and colour packs to match them. Plus buyers can choose from a range of customisable dashboard designs and specify a 300W BeatsAudio sound system. Smartphone integration's better too. On top of that, the only extra feature I'd really want to add would be the accident-saving 'City Emergency Braking' system which will warn you of impending collisions at urban speeds and if necessary, at under 19mph, even brake the car for you.

Could I Live With One?

The Volkswagen up! is an honest and rugged citycar. If you're a bit ticked off with the massive complexity that's built into so many new urban runabouts, take a look at this one. It's cheap, cheerful and feels utterly indestructible. If I had a citycar choice to make and I was interested in a classier option, I'd be tempted.