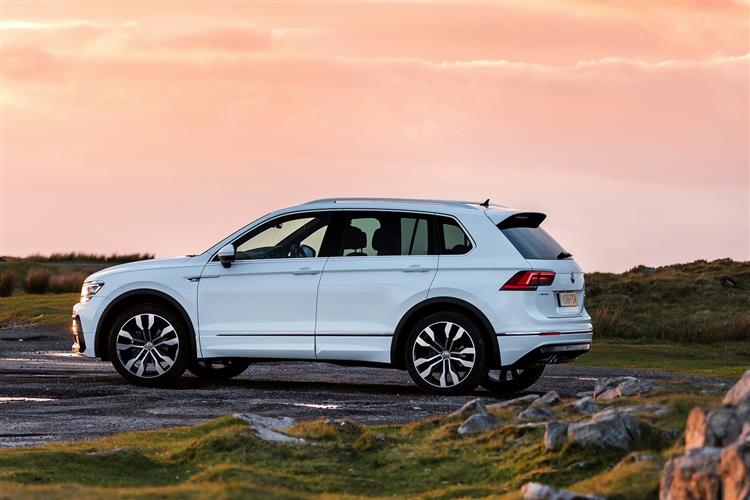 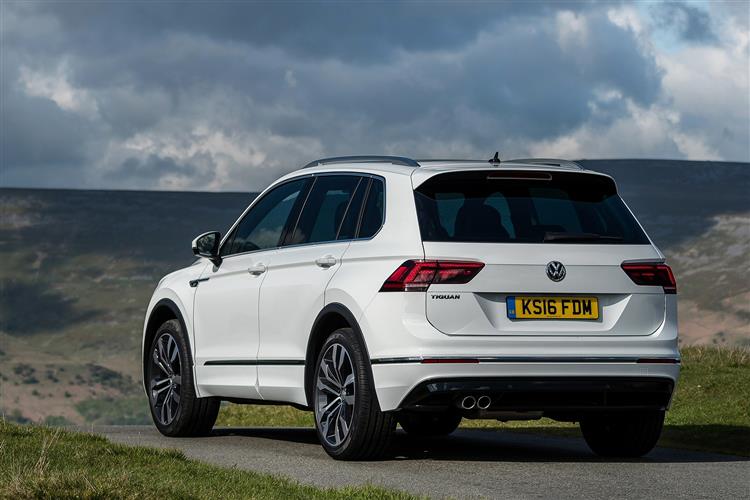 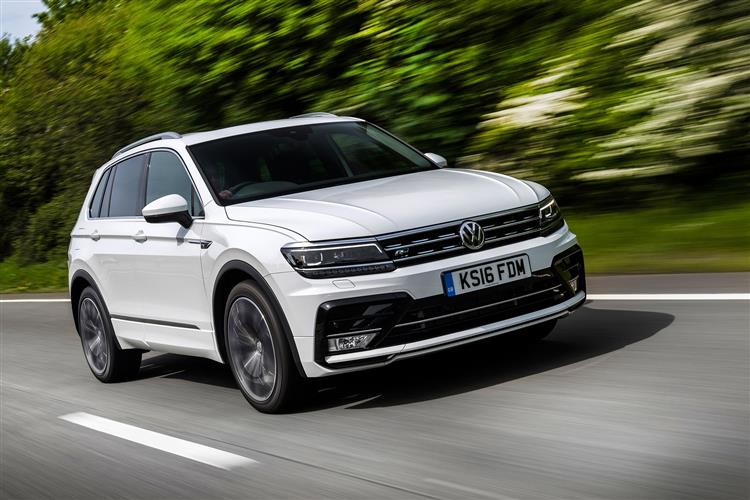 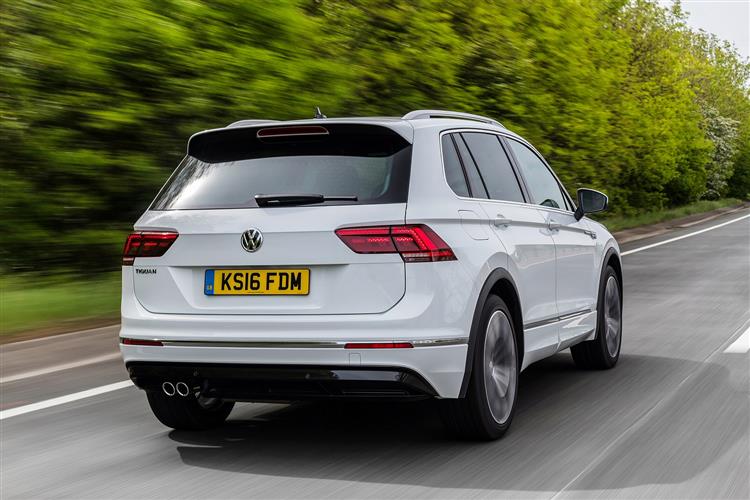 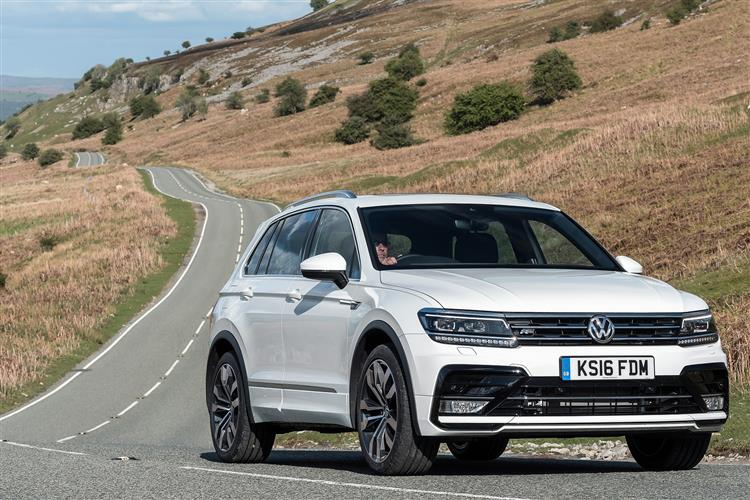 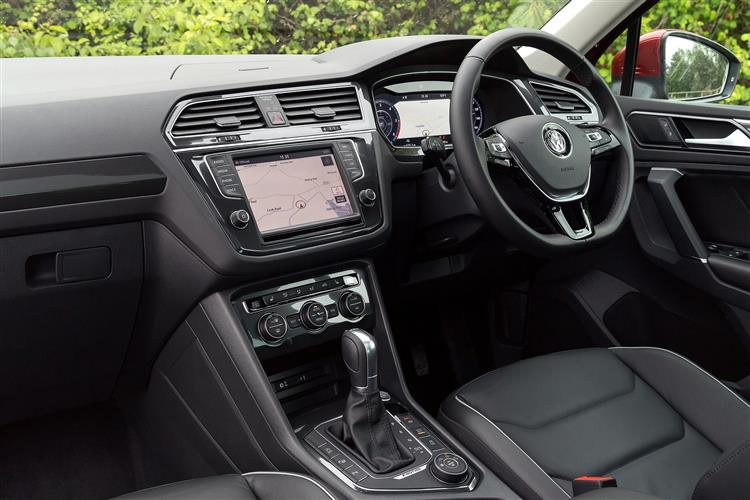 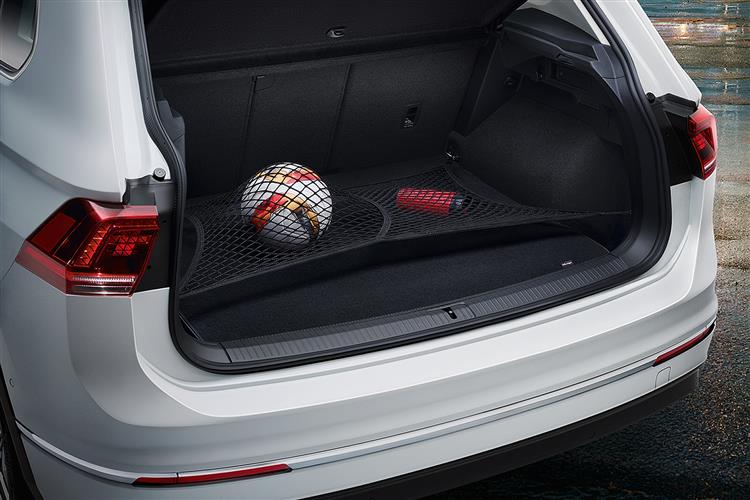 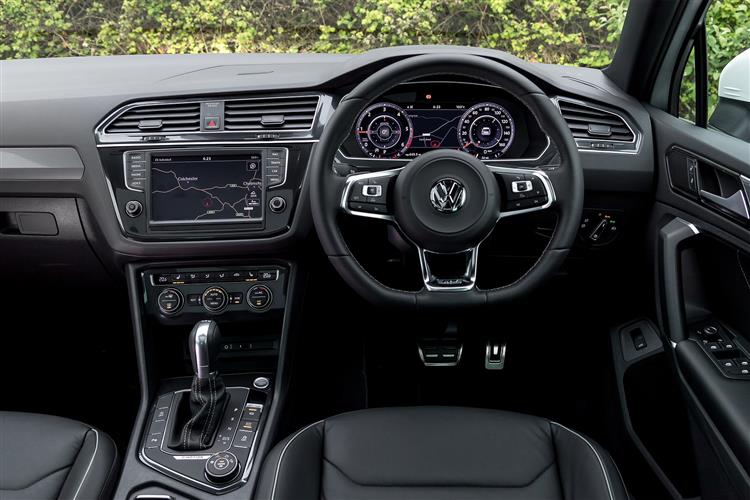 Volkswagen's much improved take on their second generation Tiguan mid-sized SUV delivers a high quality, well priced package that's now smarter and more efficient. All the car you'll ever really need? Many see it as just that.

This improved version of the second generation Volkswagen Tiguan looks a strong package. Jonathan Crouch checks it out.

If you're planning to spend somewhere in the £25,000-£40,000 bracket on a mid-sized SUV or Crossover, you'll certainly not be short of choice. But choice can sometimes be a compromising thing - and so it is here. So for the premium badge you'd like on a car of this kind, you have to compromise on equipment. For the practicality you'll need, you have to compromise on trim and build quality. And for the all-wheel drive ability you'll maybe sometimes want, you've to compromise on tarmac driving pleasure. Volkswagen understands this, which is why in 2007, they brought us this car, the Tiguan, a contender in this class that was arguably less compromised than any other. A second generation version launched in 2016 and it's the updated version of that MK2 model we're looking at here. The Tiguan model line has historically been hugely successful for Volkswagen, having accounted for nearly 6 million global sales to date. And the reasons aren't hard to fathom. Here, you've all the class of a Honda CR-V or a Toyota RAV4 at a significant saving in cost, pricing being not too much more than Far Eastern budget brand models in this segment. Let's see how the improved version of this car stacks up.

As before, the Tiguan range is primarily based around a 1.5-litre TSI petrol unit with either 130 or 150PS. And a 2.0-litre TDI diesel which now gets more efficient twin-dosing selective catalytic reduction system and in the mainstream range can be had in either 150PS or 200PS guises. You'll need the diesel option if you want 4MOTION 4WD. You can also now have a new PHEV 'eHybrid' petrol model which uses the same 1.4-litre TSI petrol engine and electric motor as the Golf GTE. This, Volkswagen says, will give the plug-in hybrid Tiguan an all-electric driving range of 31 miles and the ability to travel at speeds of up to 81mph in electric-only mode. There's also a high performance Tiguan R variant which gets an up rated 316bhp version of the 2.0-litre TSI petrol turbo engine already used in the T-Roc R. Like other R models, the Tiguan R gets 4MOTION four-wheel-drive and benefits from a clever torque vectoring function in the 4x4 system that can vary drive between front and rear axles, as well as between the left and right wheels. The R variant uses a 7-speed DSG auto gearbox and a Dynamic Chassis Control system which lowers the ride height by 10mm. In the mainstream Tiguan range, 4MOTION 4WD is a particularly popular option, many buyers opting to stretch beyond the entry-level front-driven variants. The fifth-generation 4MOTION system provides a faster apportioning of power to all four wheels via a process that provides pre-activation of the rear clutch and improved operation of the electronic differentials. In 4x4 form, the car has 200mm of ground clearance, 11mm more than it would have in 2WD guise.

As before, there are two body shapes on offer. Our focus here is on the standard five-seat body style, but a seven-seat 'Allspace' variant continues to be also offered. Volkswagen claims that the re-designed front end of this updated Tiguan lends the car a significantly more confident appearance. There's a wider, more imposing radiator grille that's separated by full-LED headlights that can be ordered with VW's latest IQ.Light LED Matrix technology. The bumpers have also undergone a makeover. At the rear, Tiguan lettering is now in a prominent central position below the VW badge. Inside, the cabin has been bought into line with some of Volkswagen's newer models, with the latest version of the company's infotainment system and the availability of larger touchscreens. The 10-inch digital instrument binnacle screen has also been updated. There's a re-designed steering wheel featuring touch controls and Volkswagen has also improved the climate control functions by means of touch sliders and touch buttons - like you'll find in the Golf 8. And lots of tiny additional details also feature, like the pair of illuminated USB-C ports on the centre console and new multi-coloured ambient lighting. As before, there's decent passenger space on a rear bench that can slide back and forth. And luggage space is up to 615-litres with the standard 60/40 split folding rear seats in place - or 1,655-litres with the seats lowered.

Expect pricing to sit mainly in the £25,000 to £40,000 bracket and count on having to find a premium of just over £2,000 if you want the 4MOTION 4WD system on the diesel variant. There's a base-trim variant and beyond that, customers choose between 'Life', 'Elegance' and 'R-Line' trim levels. Standard equipment across the range includes a 10-inch centre-dash infotainment screen with an operating interface that responds to the command 'Hey Volkswagen', followed by whatever you want to ask. All models come with alloy wheels, 'Climatic' semi-automatic air conditioning, a trip computer, all-round electric windows, an alarm and power heated door mirrors. Plus there's a 'We Connect Go' app that allows you to interacts with your Tiguan from wjherever you are using your smartphone. Safety kit includes a clever 'Automatic Post-Collision Braking System' that automatically brakes the car down to 6mph after a collision - so if, say, someone hits you and, understandably, you go to pieces, the car will automatically sort itself out. There's also a 'Front Assist' system that at speed, scans the road ahead as you drive for potential accident hazards, warning you if one is detected and automatically braking if necessary. You get that same kind of functionality at urban speeds too, as part of a 'City Emergency Braking' system included as part of the 'Front Assist' package.

Let's look at the WLTP-rated figures. The latest 1.5 TSI 130PS petrol unit achieves a WLTP-certified figure of up to 44.8mpg on the combined cycle, while emitting up to 143g/km CO2. For the 1.5 TSI 150PS variant, the figures are up to 42.8mpg and 151g/km. Go for a 2.0 TDI diesel 150PS DSG model with 4MOTION 4WD and you can expect up to 42.8mpg and a CO2 reading of 173g/km, which is pretty creditable. The eHybrid PHEV model offers a credible alternative to diesels and boasts 31 mile electric only WLTP driving range. In other words, if the vehicle is only used for short commutes and re-charged regularly overnight, it is conceivable that this Tiguan eHybrid could be run almost entirely without fuel. And conceivably (if you get your charging regime right) on off-peak electricity that'll hopefully cost pennies rather than pounds to consume. Expect your BiK tax exposure with a Tiguan eHybrid to be based on a combined cycle fuel economy figure of over 200mpg and emissions of under 40g/km. Powering this Volkswagen PHEV up from a domestic socket would take around five hours, but most owners will want to find an extra few hundred pounds to install a Wallbox charger in their garages. Use such a wallbox - or indeed plug in to one of the many public charging points springing up around the country - and you'll be able to reduce your charging time period from empty to around three hours and thirty minutes.

It's not hard to see why the Tiguan is such a popular choice in its sector here in the UK. You get pretty much all the quality of premium-badged mid-sized SUV for not much more than the price of a budget brand contender. You get pretty much all the tarmac handling ability of a Qashqai-like Crossover with virtually all the off road ability of something more capable. And it all comes with the enduring appeal of that Volkswagen badge and the enduring residual values that'll go along with it. Such has always been this car's appeal and not much has changed with the updated version of this MK2 model. It's not a car for driving enthusiasts or those who live halfway up Snowdon - but then such people are unlikely to be shopping in this sector anyway. What it does offer in this improved form are running costs from an ever-more efficient range of engines that make the transition to a car like this from an ordinary family hatch less painful than ever. And an extra dash of polish in everything it does that'll make you feel as good when you open the bedroom window as you will when you're at the wheel. A sensible choice then, but one you'll enjoy making. 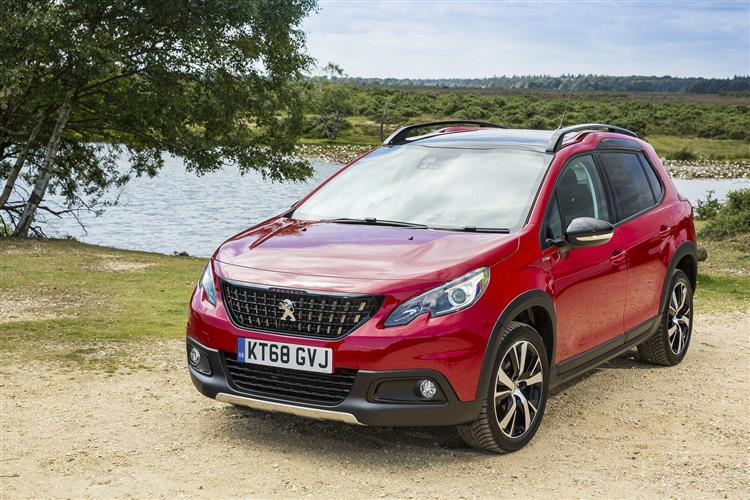 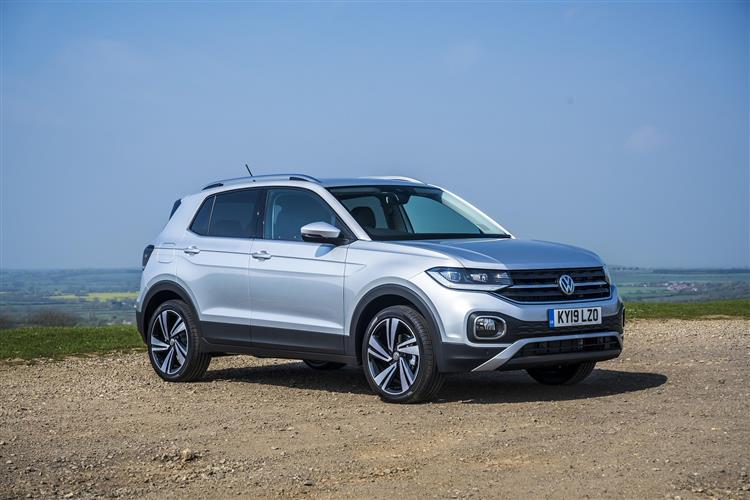 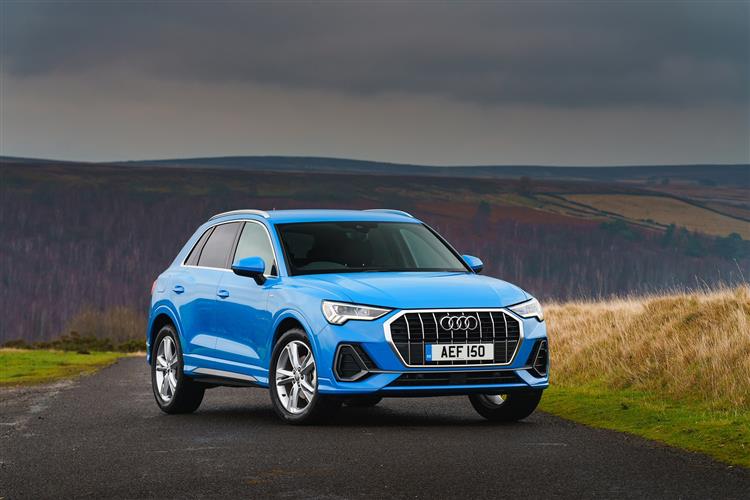