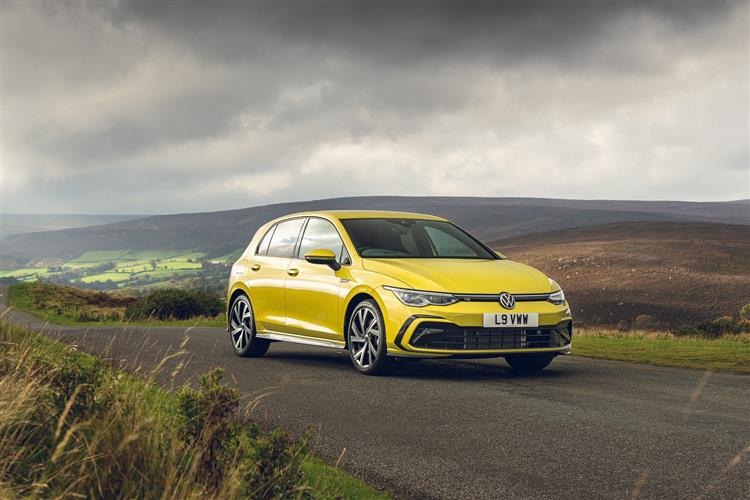 For years, Volkswagen offered just one Plug-in hybrid Golf variant and we knew it as the GTE. At the end of 2020, a new generation version of that model arrived on the market, based on the eighth generation Golf and powered by a 245PS version of the usual 1.4-litre TSI-based powerplant. But it was a touch pricey for some folk, hence the arrival of this de-tuned 204PS version of the same powertrain, slightly less sportily-packed in this model, the Golf eHybrid. Adding this variant to the range made sense: the identically engineered SEAT Leon/CUPRA Leon and Skoda Octavia models also offer their customers PHEV motoring with a choice of 204 and 245PS power outputs. And it gets you a substantial price saving over the alternative Golf GTE. Let's take a closer look at this car.

As with the Golf GTE, the combustion element of this Golf eHybrid model's drivetrain uses a 150PS 1.4-litre TSI petrol engine and a 6-speed DSG auto gearbox. What's changed here is that total output falls from 245 to 204PS but there's still 350Nm of torque, enough to propel this model from rest to 62 mph in only 7.4 seconds, before going on to a top speed of 137mph. Around town, practically all short-distance trips are possible in the Golf eHybrid with zero tailpipe emissions. The car's full electric range of 44 miles on a full charge, allied to the fact that the Golf eHybrid always starts journeys in all-electric E-MODE if the battery is sufficiently charged (except at battery temperatures of below -10??C), means that all-electric running will probably become the norm for many drivers. Moreover, since the Golf eHybrid can also be driven in all-electric mode at speeds of up to 80mph, motorways can also be covered under purely electric power. It is also possible to reserve electric energy during longer journeys in order to guarantee that it is possible to drive in E-MODE, with zero local tailpipe emissions, in a built-up area at your eventual destination. At the start of the journey, you simply enter the percentage of the battery capacity that must be reserved into the infotainment system. The battery doesn't have to be fully charged at the start of the journey for this to function effectively, since the lithium-ion unit can also be charged during the trip via both the TSI engine and brake energy recuperation.

The Golf eHybrid doesn't have the sporty GTI-themed looks of Volkswagen's other PHEV Golf, the GTE - but then you might like its more discreet, conservative vibe. That's based around mid-range 'Style' trim, which comes with 17-inch 'Belmont' alloy wheels and gets body-coloured front air intake fins, with chrome-trimmed lower fins extending across the lower radiator grille. Plus there's an LED light strip extending across the upper radiator grille between the LED 'Plus' headlights. Inside, as on all Golfs, Volkswagen's so-called 'Innovision Cockpit' comes as standard, a fusion of the brand's 10.25-inch 'Digital Cockpit' instrument binnacle screen and the company's 10-inch 'Discover Pro' centre-dash navigation infotainment display. Also standard is a background lighting system which bathes the cabin in a spectrum of 30 configurable colours. Otherwise, things are much as with any other Golf, so you get great build quality and decent space for two adults on the rear bench. As with the GTE, the Plug-in system compromises boot space capacity, which falls from 380-litres with an ordinary Golf to 273-litres. Fold the split rear bench and you can extend this to 1,130-litres.

You'll want to know how the Golf eHybrid's figures compare to those of the Golf GTE. Well, an eHybrid manages 235.4mpg, 21g/km of CO2, which means a BiK rate of only 7%. Plus it has a 44 mile all-electric driving range. For the Golf GTE, which has a 40 mile driving range, the fuel figure is the same and the CO2 reading is 26g/km. A full charge of the battery in the Golf eHybrid is normally performed via an external power supply. A charge port is provided in the front wing on the driver's side into which the charging cable is plugged. Depending on the power source, charging takes place with 2.3 or 3.6 kW alternating current (AC). When supplied with 230volts at 2.3 kW via the normal domestic grid, the battery is fully charged in five hours if it had previously been completely empty. If the power source is a Volkswagen wall box or a charging station with 360volts and a charging cable designed for 3.6 kW, the charging time is reduced to three hours and 40 minutes. The battery charger manages charging fully automatically - all the driver has to do is to connect the plugs. The driver can also control the time at which charging takes place via the infotainment system or using the We Connect app on a smartphone, in order to benefit from cheaper off-peak electricity.

There's lots to like here, the classy Golf vibe mixed with an uber-dose of sense and sensibility, creating the kind of compelling combination you'll rarely find in a family car. You do without the sporty look and feel of a Golf GTE, but many owners will happily forgo that for this variant's significant price saving. As with a GTE, everything here's so straightforward - so normal. Just leave the thing in its 'Hybrid Auto' setting and you'll get diesel-like fuel economy with a real surging turn of pace when you need it. Even if you never once plugged this car in, you'd probably be perfectly happy with what you had. So no, you don't have to press buttons and select menu options to enjoy and benefit from Golf eHybrid motoring. But devoted owners will want to do that. These people will see ownership as being all about mastering and getting the most from the Plug-in hybrid concept. For them, there'll be nothing normal about what this Volkswagen can do. They'll talk of its silent all-electric operation. Or running costs that decimate their annual tax payments and see a potential three-figure range achievable from every gallon. Or maybe the way in which when used for short journeys, it can make fuel station visits a thing of the past. It's all deceptively unique - and rather futuristic. In a car very much for today.