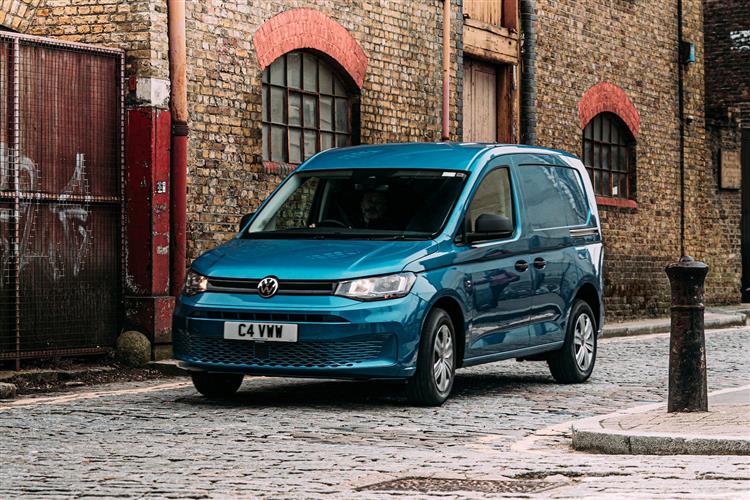 The problem with van-based MPVs is easy to identify. It's the lingering feeling that no matter how much glazing you have around the outside, when you're behind the wheel you'll still feel as if you're delivering pizzas. No matter how hard many manufacturers have tried to get away from the light commercial origins, these vehicles can't shake off the faint whiff of deep pan pepperoni. But if you were to lay odds on anyone to crack this thorny issue, it would be Volkswagen. With a range of increasingly sophisticated passenger cars, Volkswagen has decided to sprinkle a little of that urbane charm onto the fourth generation range of its compact Caddy people carriers, van-based MPVs that aim to be cut above the norm. The challenge is to do so while still keeping prices in the ballpark that van-based MPV customers expect. It's a tougher brief than you might expect.

No previous Caddy model has been better prepared to function like a car. Because no previous model has used car-like coil-sprung suspension, older generation Caddy MPVs having shared the same van-like leaf-sprung suspension as their LCV cousins. A much more sophisticated chassis also helps, the much stiffer Modular Transverse Matrix platform used on all Volkswagen's current Golf, Passat and Tiguan-sized car models. Plus there's a fresh electrically assisted power steering rack with a more direct feel. All of this is the same of course as you get with the rejuvenated current Caddy Cargo van model, though the payload of this MPV version is 100kgs lower (506kgs). The engines on offer are the same as those in the Caddy Cargo of course too. There are three - a 1.5-litre TSI petrol unit with 114PS, offered with a 6-speed manual gearbox with the Caddy and with a 7-speed DSG auto with the Caddy Life. Alternatively, there's a choice of 2.0-litre TDI diesels, one with 102PS only offered with that manual gearbox; and the other with 122PS which comes only in DSG auto form with a Caddy but can be had with either a manual or an auto with the Caddy Life. At the time of this test in Autumn 2021, Volkswagen wasn't offering this MPV design with the optional 4MOTION 4WD system you can get with the Caddy Cargo van.

Bet you weren't expecting a van-based MPV to look as good as this? The fourth generation Caddy Cargo van's sleeker looks translate well into this MPV model. It's offered in standard 'Caddy' and plusher 'Caddy Life' forms (the latter recognisable by 16-inch 'Wien' alloy wheels and black roof rails). And, as with the van, you get a choice of standard short wheelbase or 'Maxi' long wheelbase body styles. You'll obviously want the 'Maxi' version if you're looking for seven seats (though a third seating row can also be added into the short wheelbase variant as an option). All variants get twin side sliding doors, but those on the 'Maxi' version (844mm wide) are 143mm wider than the ones on the short wheelbase version. The ambiance up-front is very car-like. And further back, there'll obviously be a lot more seating room in the second and third rows with the Caddy Maxi's long wheelbase, which gives you an extra 353mm of length with a larger luggage area. Even with all three seating rows in place, a Caddy Maxi can offer 446-litre of space. In five-seat format, you're looking at 1,720-litres of space in the Maxi - or 1,213-litres with the standard version. Fold the second row seats and it really does get van-like, 3,105-litres of space in the Maxi - or 2,556-litres with the standard version.

The story here is that you get two spec levels, a basic minibus-type version (that the model badged merely 'Caddy'); or an MPV that really feels much more like a car (the 'Caddy Life'). Either way, as we said in our 'Design' section, there's the choice of either a short wheelbase model with the option of seven seats. Or a seven-seat long wheelbase 'Maxi' body style (from which you can delete the third seating row if you really don't want it). Prices start at just over £26,000 for the Caddy short wheelbase: add around £2,200 to that if you want the Caddy Life version. Many will want to find the extra £1,500 Volkswagen wants for the long 'Maxi' versions, which obviously have much more space for the third seating row. But the longer 'Maxi' shape brings the cost up of course - to around the £30,000 mark if you want a Caddy Maxi Life model, as many families will. Adding the 3rd row package into the short wheelbase model costs just over £800 more - we can't really see why you'd do that because it doesn't save much in the final analysis. With base 'Caddy' spec, you are of course limited to the basics, though they do include a 'Composition' infotainment system with a 6.5-inch centre screen, twin side sliding doors and a very complete rosta of camera safety kit. The 'Caddy Life' variants of course offer much more. As we said in our 'Design' section, visually, 'Life'-spec is marked out by 16-inch 'Wien' alloy wheels and black roof rails, plus you get LED rear tail lamps. With the 'Life' version, you also get power-folding mirrors and all-round parking sensors, while inside, there's a removable waste bin and the seats get smarter 'Trialog' upholstery and at the front, feature lumbar support and sliding drawers. 'Life'-spec gets you a bigger 8.25-inch 'Composition' central infotainment screen with 'App Connect' (enabling 'Apple CarPlay' and 'Android Auto' smartphone-mirroring), along with 'We Connect Plus' preparation (so that you can interact with the screen and the car using your smartphone).

As you'd expect, this Volkswagen delivers a frugal set of running cost returns. In standard Caddy form, the short wheelbase model in 2.0 TDI 102PS manual form manages up to 58.9mpg on the combined cycle and up to 126g/km; for the 2.0 TDI 122PS DSG auto version, the figures are up to 55.4mpg and up to 134g/km. With the 1.5 TSI petrol manual model, it's up to 44.1mpg and up to 144g/km. These figures are only fractionally reduced if you choose either the 'Maxi' body shape and / or the 'Life' model spec. As for service intervals, the efficient engine range enables Volkswagen to offer service intervals spread quite far apart - every 18,600 miles or every two years, whichever comes first. Various service plans are of course available to spread the cost of maintenance. And there's a 'Service' section of the 'Vehicle' screen telling you when oil change maintenance and inspections are due. You'll need to get the 15-litre AdBlue tank topped up as part of regular servicing too. Finally, there's the three year warranty. This one gets the cover package applicable to a Volkswagen van, so the mileage limit in this period is raised from 60,000 to 100,000 miles. There's also three years of pan-European Roadside Assistance also included with no mileage restriction. The paintwork warranty lasts for three years and the Caddy is protected by a 12-year anti-corrosion body warranty.

As an exercise in managing compromise, the Caddy people carrier is a triumph. Volkswagen has managed to keep prices reasonably competitive for this type of vehicle, while at the same time injecting enough sophistication to distance it from its light commercial roots. That it has done this without compromising practicality in any significant manner marks this Caddy MPV as one for the shortlist if you're after really sensible family transport. With its neat styling and rugged utility, this is a proper multi-role vehicle, and in seven-seat guise it has more passenger space in the third row than you'd get from a seven-seat SUV costing maybe £10,000 more. In short, if you need a vehicle that can discharge some arduous family responsibilities and emerge unscathed, this one's well worth a look.