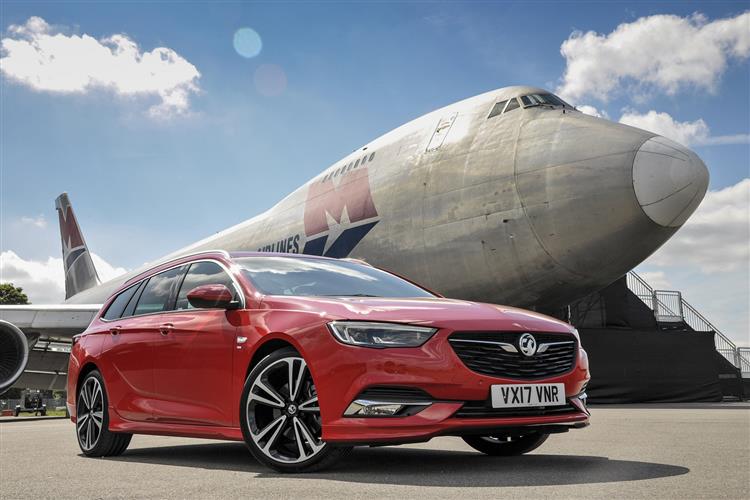 Many predicted that MPVs and 4x4s would be the death of the estate car. There's no doubt that they dragged it into an alleyway and roughed it up a bit, but they failed to finish the job and the estate has come out fighting. With a smaller section of the market to compete over, the top estate products got their acts together. They're now more keenly differentiated from the saloons and hatchbacks that spawned them with sleeker styling and more innovative and practical load areas. If you'd written the estate off as an outmoded product, now might be the time to give the modern take on the genre another chance and there's no better place to start than Vauxhall's second generation Insignia Sports Tourer. There's an efficient engine range, smart styling and even the promise of an SUV-inspired fashionable 4WD 'Country Tourer' model at the top of the line-up.

On the move, this Insignia Sports Tourer feels like the bigger car it's now become, the suspension floating you over broken surfaces that would have troubled and impeded the previous model. Importantly, this second generation model is around 200kg lighter than its predecessor and that really shows when cornering at speed, where there's less body roll than before and generally, a much higher level of agility. On to engines. When it comes to petrol power, small capacity turbocharged engines that use unleaded are very much in vogue at present and the 1.5-litre unit supplied here should suit that trend, offered with either 140 or 165PS. There's also a 200PS 1.6-litre Direct Injection turbo petrol unit. A super-slick 8-speed auto gearbox is optional on most models. When it comes to diesel, there are also 110PS and 136PS versions of Vauxhall's 1.6-litre CDTi unit. The 170PS 2.0 CDTi diesel continues to be popular too. It's also available in bi-turbo 210PS guise, in which form it's mated to an intelligent all-wheel drive system that uses a state-of-the-art rear torque vectoring system for greater cornering traction and sharper turn-in. Those 2.0-litre diesels are the only powerplants offered in the Country Tourer model, which features a slightly higher ride height. Across the Insignia range, a super-slick 8-speed auto gearbox is optional on most models.

There's a £1,500 model-for-model premium to pay if you want the extra luggage space of the Sports Tourer estate variant rather than the Grand Sport five-door hatch. This station wagon bodystyle is also available in raised 4x4 'Country Tourer' guise if you want an alternative to an SUV. Despite the fact that this Insignia Sports Tourer has been pushed up-market, prices have been kept very competitive - and indeed have been sharpened so that they more accurately fit the latest 'BIK' 'Benefit-in-Kind' categories. In fact from launch, Vauxhall claimed that some versions of this MK2 model Insignia Sports TourerSport were up to £1,500 less expensive than their direct first generation predecessors. To be specific, we're talking about a range priced in the £21,500 to £40,000 bracket. At the bottom end at least, those really are very affordable figures for a car of this size. Let's take a look at a few specifics on the model line-up. Automatic transmission is an option across the range for around £1,700 - it's the brand's 8-speed auto 'box. Bear in mind that to get the 2.0-litre CDTi diesel most buyers will probably choose, you're looking at pricing starting from just under £22,000. Four-wheel drive is limited to the top 210PS 2.0-litre biturbo diesel and with this engine, your Insignia could easily command a list price tag of around £33,000.

Around 85% of Insignia buyers go for a diesel - and you can see why. A WLTP-rated combined cycle figure of up to 57.7mpg is possible from the 1.6 CDTi 110PS unit many Sports Tourer buyers will choose. That falls to 51.4mpg if you go for the 2.0-litre diesel. As for residual values, well these will depend on whether the industry recognises this Sports Tourer model's shift up-market. Even if it does, the depreciation levels won't match those of premium German rivals. But then, you'll be paying less up-front in the first place, so it's swings and roundabouts. The NEDC CO2 figures are very competitive, the 136PS 1.6-litre diesel capable of 121g/km of CO2. The base 1.5-litre petrol variant manages up to 45.6mpg and 129g/km. You'll also need to know that Vauxhall includes a three-year, 60,000 mile warranty as standard, a package that can be extended up to five years and 100,000 miles at extra cost. A year's free breakdown cover is also provided, along with a six-year anti-corrosion guarantee. Plus you can opt for a service plan that lets you pay monthly to spread the cost of regular work to your car. As part of this, Vauxhall offers discounts on wear and tear items, such as brake pads and windscreen wipers.

The estate car's task has never been a tougher one with the sector of the market it once had to itself now swarming with compact 4x4 and MPV rivals. The solution, as employed by Vauxhall with this Insignia Sports Tourer, is to concentrate on sleek styling, a polished driving experience and a premium feel. The car is certainly a desirable product. The question is whether enough people will desire it over the numerous alternatives available to the family with this kind of money to spend. If you're after a genuine all-rounder that's comfortable and entertaining on the road, has a decent carrying capacity and looks that can turn heads, it should make a sound choice.