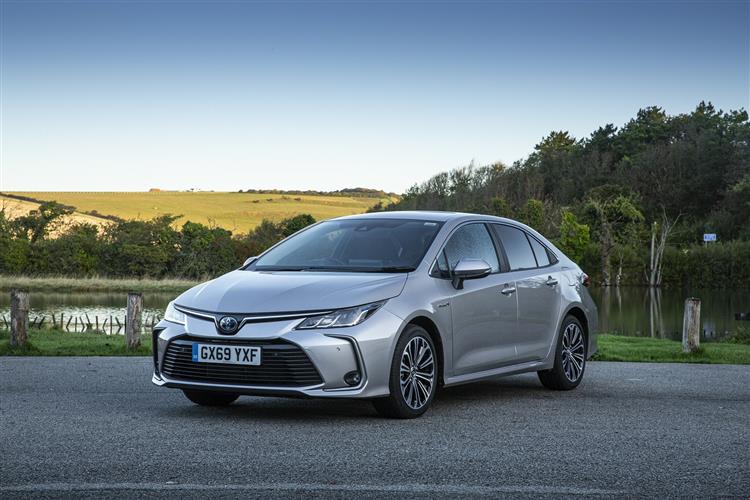 Why does Toyota offer a saloon version of the Corolla? It's a reasonable question given that the market demand for sedans in the family hatch segment is tiny. But there's actually a very good reason. The Japanese maker no longer has a conventional mid-range saloon offering these days, having killed off the Mondeo-sized Avensis model back in 2018. And that car used to shift around 4,000 units a year in our market, people who would still probably like to consider choosing a Toyota. The Corolla Saloon aims to keep these folk loyal to the brand. It's a bit different from the old Avensis of course - but actually not that much smaller; there's a huge 471-litre boot. The key thing that's different from that old car - and the thing that sets this Corolla Saloon apart from direct segment rivals like saloon versions of the Fiat Tipo and the Mazda3 - is that it only comes with a full-Hybrid engine. The Avensis never got one of those and customers of compact saloons won't be used to having that option. Should they welcome it here?

Unlike the Corolla hatch and Touring Sports estate models, this Corolla Saloon can't be had with the 184hp 2.0-litre full-Hybrid engine recently developed for this model. So the petrol engine in question for Saloon buyers of this car will be Toyota's usual 1.8-litre full-Hybrid unit, which works with a 53kW 600V electric motor to generate a combined system output of 122hp. As a full-Hybrid, this powertrain has the advantage of offering an all-electric drive capability, with zero emissions and very low fuel consumption. Which sets it apart from the mild-Hybrid 2.0-litre Skyactiv-G engine that you'll be offered in this car's closest rival, the Mazda3 Saloon, a car that can't ever be run with independent electric motion. This Corolla's engineering recipe might sound pretty similar to that of the old Auris hybrid, but the powerplant on offer here is now a much cleverer unit. There's an increased valve angle for a better fuel and air mix, plus it can switch at will between intake and direct injection to prioritise either performance or economy. Toyota says it's worked hard to better mate this package with the belt-driven CVT auto gearbox that all its hybrids have to have, pointing to the way that greater torque from the electric motor should now provide a more linear increase in revs under acceleration. And sure enough, if you've owned one of the brand's petrol/electric models before, you'll notice that this one is more driveable. 62mph from rest occupies 11.0s, en route to a 112mph maximum. Expect refinement to be excellent; certainly far better than it would be in a rival rumbly diesel.

There's actually quite a lot that is different here over a Corolla hatch. For a start, this Saloon sits on a longer wheelbase - the one used for the 'Touring Sports' Corolla estate. And, unlike the hatch and estate, it's not built in Britain at Toyota's Burnaston factory in Derbyshire. It's assembled instead in Turkey, because this saloon variant is made primarily to appeal to buyers in Russia and Eastern Europe, who generally prefer their Corolla to be a saloon. The styling of this sedan body shape is a bit different to that of the two other body styles as well - and not only with the change to a notchback. The bumpers, headlights and tail lamps are all different. Inside, rear seat space is better than it is on the hatch because of that longer wheelbase, which is why this variant appeals to the taxi trade. Out back, there's a much bigger boot than the hatch - this saloon rated at 471-litres - but of course, it'd be more awkward to get bulky items in and unfortunately, it's not possible to flatten the rear bet backrest to extend the load bay. Up-front, there's the usual Corolla cabin, which can't offer cutting-edge infotainment but feels of much higher quality than the old Auris model.

The full-Hybrid engine puts the price of this Corolla Saloon well above that of a rival Fiat Tipo Saloon - but not so far above a competing mild-Hybrid Mazda3 Saloon. We're talking around £24,000 for the entry-level 'Icon' variant, with prices rising to around £25,000 for mid-range 'Icon Tech'-spec and around £26,000 for top 'Design' trim. The brand won't be offering the conventional 1.6-litre petrol engine that's available with this Corolla variant in other markets. Even 'Icon' variants deliver 16-inch alloy wheels, heated front seats with lumbar support, automatic LED headlights and dual-zone air conditioning. There's also an 8-inch centre-dash 'Toyota Touch 2' touchscreen, your access point to a DAB tuner and a reversing camera. As the name suggests, the 'Icon Tech' grade adds further useful technology features, including satellite navigation and voice control, plus parking sensors and Intelligent Park Assist' set-up that will steer you into spaces. All Corollas get as standard the full package of 'Toyota Safety Sense' camera-driven safety features. These include autonomous braking, adaptive cruise control, Lane Trace Assist, Road Sign Assist and Automatic High beam.

Toyota thinks that Corolla Saloon buyers will be happy to be limited to a Hybrid engine - and a look at the WLTP efficiency stats reveals why. This car manages 62.8mpg on the combined cycle and up to 101g/km of CO2 in base 'Icon' form. That's further helped, Toyota expects, by the fact that for typical customers, up to 50% of typical commuting journeys will be accomplished in all-electric drive. The Japanese maker describes the Corolla's Hybrid technology as being of the 'self-charging' sort, which means that it isn't of the currently popular Plug-in variety. The brand of course has PHEV technology (it's available on top versions of its Prius model) but currently feels it isn't necessary for the Corolla line-up. What else? Well, the five year 100,000 mile warranty is extremely good and even after that runs out, you'll find that most spares are relatively inexpensive. There's also three years warranty against rust and 12 years of anti-corrosion protection.

There are reasons why Eastern European customers prefer small saloons - and Corolla saloon buyers will readily identify with them. More rear seat space; more secure storage - and arguably, more elegant looks. To those virtues, this Toyota adds the advantage of full-Hybrid power - though the installation of that engine elevates its price above direct market rivals. Otherwise, it's the usual Corolla recipe - well built and now pretty stylish too. Plus levels of camera safety and equipment that rivals struggle to better. The Corolla Saloon represents a glimpse back to the kind of body style families used to want, combined with the kind of engine that today, they ought to need. If for you, that's an attractive combination, you'll find this an attractive prospect.