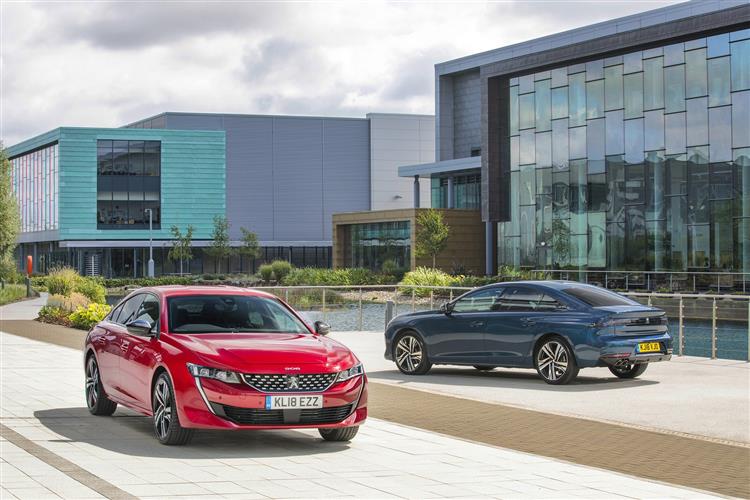 The humble station wagon. No longer quite so humble these days. In fact, estates have become something of a fashion statement in recent years. You'd choose one over the ordinary saloon model even if you didn't necessarily need the extra carrying space. Most Peugeot 508 buyers do. Here's the 508 SW model, in this case rejuvenated to take on a raft of tough rivals including estate versions of models like the Skoda Superb and the Volkswagen Passat. So today, what does a potential 508 SW buyer now really want? Experience in the market suggests three things: style, class and technology. In response, Peugeot has put a lot more thought into this car. It looks more up-market - and we're promised that it will feel that way when you take a seat behind the wheel. There's extra hi-tech equipment too, with things you'd have to pay extra for on some rivals. So, has the French brand got this recipe right? Let's find out..

As you'd expect, this SW variant drives just as its saloon stablemate does. The hardware certainly looks promising here. There's a proper multi-link rear suspension set-up and a strong crop of engines from which buyers can choose. The previous generation 508 SW was launched here with an all-diesel line-up, but a lot's changed since then and today, a car in this class needs strong, efficient petrol provision too - which it gets in this case courtesy of a mainstream 1.2-litre three cylinder PureTech 130 turbo petrol unit, developing 130hp. There's also a 130hp 1.5-litre diesel. All models now come with an EAT8 8-speed auto gearbox. Peugeot can also offer you a plug-in hybrid version which uses a 1.6-litre petrol turbo engine mated to an 80kW electric motor, the resulting package offering a combined total output of 225hp. Rest to 62mph takes 8.3s en route to 155mph. If you want to go faster in a 508 SW Hybrid, you'll need the Peugeot Sport Engineered 360hp 4WD version, which trims the 0-62mph time to just 5.2s. At the wheel of any 508 SW, you're positioned in front of a further improved version of Peugeot's i-Cockpit dashboard layout, which as usual, sees you looking over the rim of the steering wheel at the instrument dials, rather than conventionally through it. And as usual, the leather-stitched tiller in question is a small, grippy thing which gives you the illusion of greater interaction with the car. Or maybe it won't be an illusion. Higher-spec models are fitted out with adaptive damping. And all variants get the usual drive modes system, which adapts steering, throttle and gear change timings to the way you want to drive.

The idea with this estate model was to bring the radical styling traits of the 508 saloon to station wagon customers. At just 1.42m in height and 4.78m long, the 508 SW's proportions give it quite a dynamic body shape, stylised by smooth, flowing lines and a sleek, low roof. The look is further enhanced further by exterior details, including frameless doors - a unique estate car feature for a mainstream carmaker. Plus there are full-LED headlights and opalescent LED daytime running lights with a vertical visual signature. The unusual exterior looks are mirrored by an original interior, highlighted, as mentioned in our drive section, by the usual Peugeot i-Cockpit dashboard design, plus there's a large 10-inch capacitive touchscreen angled towards the driver and a 12.3-inch head-up digital instrument panel. The cabin also features i-Cockpit Amplify, which enables the driver to choose between two levels of ambience - 'Boost' and 'Relax'. As for practicality, there's a hands-free, powered tailgate, a 530-litre boot and a 'Magic Flat' function for the rear bench seat which retracts to reveal a total load space capacity of 1780-litres (both those figures for conventionally-engined models).

All 508 SWs now have EAT8 auto transmission and prices start at just under £30,000, representing a £1,600 premium over the alternative Fastback model. There's a choice of 'Active Premium', 'Allure Premium', 'GT', 'GT Premium' and 'PSE' (or 'Peugeot Sport Engineered') variants. Pricing in the mainstream range runs to just under the £43,000 mark, but you'll need a lot more (from around £56,000) for the powerful Peugeot Sport Engineered Hybrid4 variant. Across the range, all are reasonably well equipped. Even base 'Active Premium'-spec gives you 16-inch alloy wheels, auto headlamps and wipers and automatic dual zone climate control. At the top of the range on plush variants, equipment runs to just about everything Peugeot could think of, including a superb 'FOCAL' surround sound Hi-Fi system, night vision, fully automated parking assistance and of course full navigation on the 10-inch central-dash HD touchscreen. There's also a 360-degree colour camera system and a wireless smartphone charging plate to keep your mobile's battery topped up during long drives. The wrap-around seats offer five multi-point massage programmes, there's a range of premium and sophisticated trim and upholstery materials and you can have a panoramic opening glass roof.

Peugeot usually specialises in extremely efficient running cost returns and this 508 is no different in that regard. Let's get to the WLP-rated figures. The base 1.5 BlueHDi 130 EAT8 variant manages up to 62mpg on the WLTP combined cycle and puts out 121g/km of CO2. Want petrol power? Well for the 1.2 PureTech 130 petrol unit with its EAT8 auto transmission, the figures are up to 49.1mpg on the combined cycle and up to 131g/km of CO2. For really frugal running cost returns though, you'll need the clever hybrid plug-in variant, which returns up to 235.4mpg on the combined cycle. This uses an 11.8kWh battery which can be fully charged in under two hours using a standard 7kW Wallbox. Once that's done, an all-electric WLTP-rated driving range of between 30-39 miles is possible. Even better news is the CO2 reading applied to this model, up to 29g/km, which means that it attracts a Benefit-in-Kind rate for company car drivers of just 10%. The faster PSE Hybrid4 model manages 138.9mpg and 46g/km. Of course running costs are about a lot more than just fuel economy and CO2 readings, so what else are you going to need to know? Well, there's the usual unremarkable three year/60,000-mile warranty. And if you are paying for maintenance work, you can budget ahead for it by taking up Peugeot's 'Service Plan' that for a fixed monthly fee, can cover you for up to 50,000 miles of motoring over either three or five years.

This second generation 508 SW is smarter, cleverer and better equipped. In other words, we're talking about a very complete package. Would you really want the kind of stripped-out, basic BMW 3 Series Touring or Audi A4 Avant you'd have to pay more for in preference to one of these? More pertinently perhaps, would you rather have a more ordinary-feeling Vauxhall Insignia Sport Tourer or FSkoda Superb estate? These are key questions if you're in the market for a conventional spacious station wagon of this sort. Try a 508 SW and you might well find that answering them is a little easier.