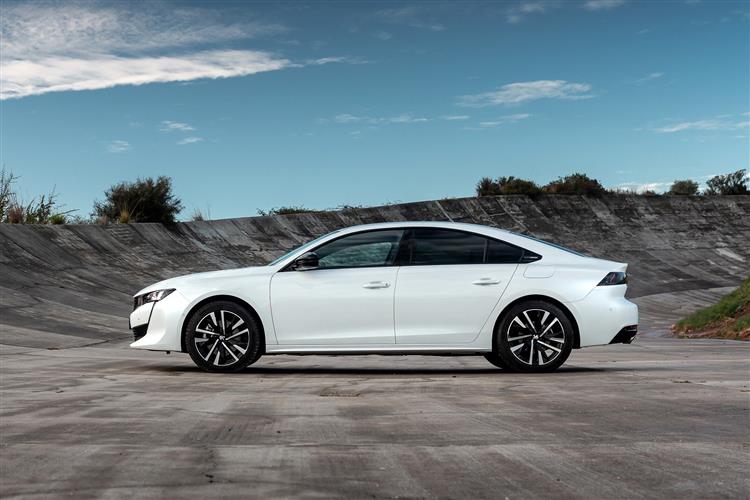 Peugeot's 508 Hybrid delivers plug-in tech from a brand keen to play the long game when it comes to electrification. Jonathan Crouch takes a look.

Stricter emissions regulations have forced every brand to invest in electrified engine tech and it's been interesting to see how different brands have prioritised the different technology options the industry currently has to offer. The French PSA Group (Peugeot/Citroen/DS/Vauxhall) has chosen to ignore the two self-charging options (mild and full-hybrids) and instead install full-EV powertrains in its smaller models and plug-in hybrid engines in its larger ones, cars like this Peugeot 508 Hybrid. The same set-up is offered in the Lion brand's 3008 mid-sized SUV, but with the 508, it can't be had in to 300hp AWD form. With the 508 Hybrid, the idea is to address a primarily business-orientated clientele attracted by the low taxation opportunity that models of this kind offer. People currently considering cars in this class like the Volkswagen Passat GTE, the Skoda Superb iV and the BMW 330e.

This, in theory, is the fastest 508 variant you could choose. This Hybrid model's combined 225hp system output is matched by the top version of the conventional 1.6-litre PureTech petrol turbo model, but this electrified variant, not surprisingly, produces more pulling power (360Nm). That goes on to be blunted though, by the fact that the hybrid tech adds a portly 280kgs to the kerb weight. This actually isn't the first time we've seen a Hybrid 508 model. The first generation design was available in electrified form too, but that was a self-charging set-up mated to a diesel engine. This time round, a 180hp 1.6-litre turbo petrol powerplant combined with an 8-speed auto gearbox is mated to a 110hp electric motor on the front axle powered by a 11.8kWh lithium-ion battery. When fully charged, this allows for 32 miles of WLTP-rated all-electric driving range. You get four driving modes, with the ones you'll be using most of the time being the 'Hybrid' and 'Comfort' settings that choose the best mix of electric and petrol propulsion to suit the driving style whilst optimising efficiency, the latter softening the standard adaptive damping. The alternative settings are either 'Sport' (where the car combines the power of the electric and petrol motors to offer livelier performance). And 'Electric' (battery power only), in which guise the car is apparently able to run at up to 84mph. With the engine chiming in, 62mph from rest occupies 8.3s and top speed is limited to 155mph. The hybrid system's extra weight slightly blunts the handling but refinement is exemplary (even with the PureTech engine working) and the ride is superb.

Unless you happen to be a Peugeot dealer or an ardent fan of the brand, you're unlikely to be able to tell a 508 Hybrid apart from a conventional variant at a glance. There's a special dichroic version of the Peugeot lion brand logo, some additional Hybrid badges stuck on the front wings, an extra left-hand filler flap for voltage charging and a cyan light that shines from the interior mirror when the car is in all-electric motion. As with any other 508, there's the choice of either a 'Fastback' five-door hatch or a quite stylish SW estate. The hybrid model changes are equally subtle inside the high quality cabin. There's a little 'lightning bolt' piano key button just below the centre-dash infotainment screen which accesses various hybrid-specific functions. And the auto gearbox lever gains an extra 'B' option so that regenerative braking force can be altered. That's about it. As ever with a 508, the interior feels of much higher quality than you'd expect from a volume brand, aided in sophistication by a digital instrument binnacle screen and a huge display for the aforementioned central monitor. As usual with a modern Peugeot, there's an 'i-Cockpit' dash layout you'll have to get used to that leaves you looking over the (smaller) steering wheel at the instrument binnacle, rather than conventionally through it. Because this design was created from the outset to accommodate battery power, there's no compromise in rear seat accommodation with this Hybrid variant and a couple of adults will be quite comfortable. Boot space is unaltered too, 487-litres in the hatch and 530-litres in the SW estate, with load capacity in the latter case extendable to 1,780-litres with the rear bench flattened. There's also a helpful compartment beneath the boot floor where you can store the charging cables, though you do lose the convenience of a spare wheel.

You'll need to be prepared to pay quite a premium if you want plug-in hybrid capability for your 508. Prices start at around £35,000 for the 'Allure' variant and extend through mid-range 'GT Line' trim up to just over £40,000 for the top 'GT'. That's for the five-door hatchback body style that Peugeot wants us to call a 'Fastback Coupe'. The alternative SW estate - likely to account for around 60% of the model mix - commands a £1,600 premium over its showroom stablemate. To save you doing the sums, that means the Hybrid kit adds between £4,250 and £3,625 on to the price of an equivalent conventional 1.6 PureTech 225 petrol model. As is obvious from the prices we've just given, the value lies further down the range. Base 'Allure'-spec gives you all the kit you could reasonably want. That includes a Connected 3D navigation system, diamond-cut 17-inch alloy wheels, keyless entry, a colour reversing camera, ambient lighting, power-folding door mirrors, all-round parking sensors, part-faux leather upholstery and Active suspension that works through the settings of the drive mode system. Plus there's a safety pack with blind spot detection, driver attention alert and road sign recognition. 'GT-Line' trim adds front fog lamps, full-LED self-levelling headlights, a wireless charging mat and sportier styling. And with top 'GT'-spec, you get leather upholstery, a surround view camera system, massaging front seats and a FOCAL premium hifi system.

Let's get to the figures. We've covered the 32 mile WLTP-rated all-electric driving range; it's actually more like around 25 miles in real-world use. And we also ought to apply real-world thinking to projections of likely fuel economy because the fantasy-land official combined WLTP figures (up to 235.5mpg for the hatch) clearly aren't likely to be replicated by the average owner. As a feather-foot, we suppose 80-90mpg might theoretically be possible but your realistic average is going to be much less than that - and certainly less than you'd get from the equivalent diesel model. Rely on the petrol engine alone and you'd struggle to average 35mpg. WLTP emissions are rated at up to 29g/km for the hatch and 30g/km for the SW. These figures will mean attractively low BiK figures. At the time of this test in Spring 2020, for a 508 Hybrid with Allure trim, a user in the 40% tax bracket would be paying £1,395 a year. To give you some perspective, if the same user were running a 508 with a 1.5-litre BlueHDi diesel engine, the annual taxation fee would be £2,415. Compared to say, a conventional petrol 1.5-litre Ford Mondeo, this car would approximately halve a typical business user's annual BiK taxation exposure. Talking of taxation, you'd have to think pretty hard before choosing the top 'GT' version because that variant's list price of over £40,000 means that a user would be paying a much higher annual VED bill (£455 from year 2 until year 6). Bear in mind that you'll need to find £500 extra to upgrade your 508 Hybrid to a model incorporating a 7.4kWh fast charger that would be capable of accepting charge from anything faster than a domestic three-pin socket. This halves charging time when charging with a typical garage 7kW wallbox. And it really ought to be standard. Charging the 11.8kWh battery takes 3 hours 45 minutes with a standard Mode 3 Type 2 cable - or 2 hours if the optional on-board charger has been fitted. You can use a provided smartphone app to set low-tariff charging times. Peugeot is offering buyers six months free use of the Polar public charging network but you won't be able to use the fastest rapid chargers.

Peugeot has to produce cars like this 508 Hybrid. It doesn't necessarily have to sell a lot of them. Most of the brand's profit comes from small cars and LCVs: if models like the 508 can also sell, then so much the better. But they can't drag down the brand's across-range collective CO2 performance in a way that would these days deliver eye-wateringly high EU fines. So plug-in tech needs to be offered in this 508 model, even if high pricing means that the market for it is still quite small. But we can see why you might want one, especially if you're seeking a stylish business conveyance and the current market trend for various flavours of SUV has passed you by. The taxation arguments are difficult to argue with and the attraction of mostly fuel-free commuting mileage is considerable. As with a 3008 Hybrid, we think that you need to stick with base 'Allure' trim for the financials to really make sense. And in this case, we'd opt for the practicality of the SW estate body style. With those caveats in place and a competitive finance deal on the table, this car starts to make some sort of sense. But if you don't agree, Peugeot won't worry too much. C'est la vie.