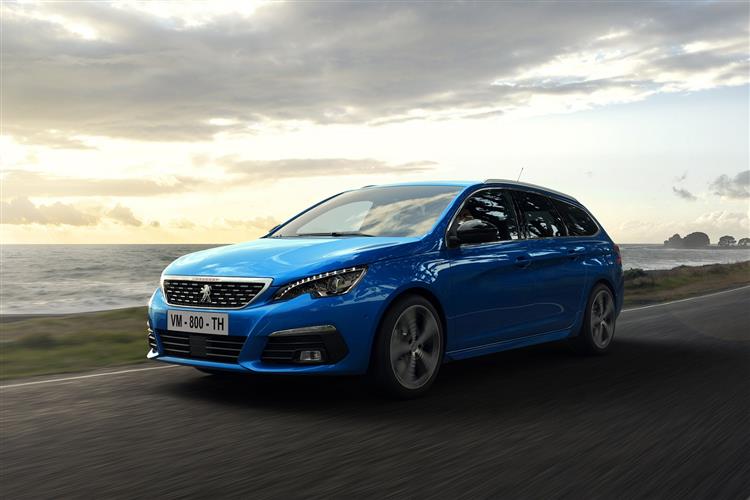 I've always struggled a little with the concept of a 'small estate car'. After all, most people buy an estate in search of space and versatility, both tough briefs to meet if the model in question is in any way compact. Though not in this case. Not with this car - the improved version of Peugeot's second generation 308 SW. Here's proof positive that it isn't how big your car is that matters. It's how cleverly it's been designed for interior use of the space that it has. Let me show you what I mean. This 308 SW measures in at just under 4.6m but offers up to 1660-litres of space. The brand's larger 508 SW, in contrast, measuring in at around 4.8m, has 1598-litres inside. You can see the point. Let's check out the improved version of this model.

The 308 SW rides on the same chassis as the hatch and is all about refinement and a relaxed gait. The suspension carries no great surprises, with a standard front strut and rear torsion beam arrangement. Peugeot has fitted rear trailing arms that allow greater longitudinal arc in the wheel travel. It sounds esoteric but it makes for a smoother ride when the rear wheels hit ridges or bumps. The electrically-assisted power steering is geared towards ease of use rather than detailed feedback but perhaps that's just as well. It makes the 308 SW very comfortable around town in the sort of usage it will mostly see. Onto engines. Peugeot has refined the mainstream 308 engine line-up down into the two units that actually sell, namely the 1.2-litre three cylinder PureTech petrol unit (offered in 110 and 130hp guises). And the 1.5-litre four cylinder BlueHDi diesel (offered in 100hp and 130hp forms). The higher-powered units in each case are offered with and optional EAT8 auto gearbox.

There are no visual changes to this revised 308 SW, but there are revised wheel designs and you can make the car look quite a lot different with a new 'Black pack' option, which enables you to change the majority of the exterior chrome trim to black. Otherwise, this estate body style is much as before, featuring a sleek bonnet that flows into a vertical grille that has a central Lion badge and the 'Peugeot' name sculpted into the upper trim. The elliptical headlights come with integrated daytime running light LEDs to produce a distinctive front light signature. This car has a mature, confident look. It's not trying too hard. We like that. Plusher variants all feature a large glass roof as standard. Despite that arcing roofline, there's plenty of space in the back. The boot below the parcel shelf is a respectable 660-litres, which includes 70-litres of storage under the floor. You also get so-called Magic Flat rear seats which allow instant folding of both parts of the rear seat using levers accessible on the sides of the boot. Thanks to the automatic lowering of the rear seat cushions, the result is a flat floor and 1,660-litres of luggage space. Not enough for the extra third row seating that previous generation models used to have though. The boot aperture has a width of up to 106cm and a length to the rear seat backs of 107cm. It has vertical side walls with minimal wheel arch intrusion and the load sill is among the lowest of any estate car. The interior retains the 'i-Cockpit' design that sees the driver looking the instruments over the top of the steering wheel. What's different though, is the installation of a 10-inch instrument binnacle screen. And as usual, there's also a 9.7-inch centre dash colour monitor incorporating 'Mirror Screen' technology which allows you to connect in your smartphone using the 'Android Auto'/'MirrorLink' or 'Apple CarPlay' systems. There's also a fast-acting navigation system with voice control that connects into the TomTom real time traffic monitoring service.

There's a premium of around £1,000 for this SW estate body style over the comparable five-door hatch, which means prices that range in the £23,000 to £32,000 bracket. And there's a choice between three main trim levels, each of which can be completed by an intermediate 'Premium' trim option. Even the most basic models include a 9.7-inch centre-dash capacitive touchscreen with 3D navigation, Bluetooth connectivity and voice recognition. Plus there's air conditioning, remote central door locking, cruise control with speed limiter, a DAB digital radio, LED daylight running lights and rear parking sensors. The driving assistance portfolio is worthy of a car from a larger segment, including Adaptive cruise control with Stop & Go function. And Peugeot's 'Visiopark with 180-degree' rear view camera and Park Assist function, which measures the parking space available and automatically steers the car in and out. Camera safety kit includes a latest-generation automatic emergency braking and collision risk warning system. And Active lane departure warning (or roadside warning) with lane correction from 40mph onwards. There's also Driver Attention Alert, Automatic Smart Beam Assist, Speed sign recognition and recommendation and an Active blind spot monitoring system

The 308 SW has always been among the more efficient compact estates you could choose - and nothing's changed on that front. Let's get to the WLTP figures - which we'll quote for the hatch. The base petrol 1.2-litre PureTech versions manage around 51mpg on the combined cycle and up to 132g/km of CO2. High-precision injection control on the PureTech Stop&Start unit enhances combustion efficiency: exhaust gases go through a catalytic converter then a passive-regeneration gasoline particle filter. And diesel? Well Peugeot's 1.5-litre BlueHDi four-cylinder unit implements at-source and at-exhaust emission control. Combustion efficiency is improved by a patented combustion chamber design, the efficacy of which was amply proven under competition conditions in the 24-hour Le Mans event. Further efficiency gains are afforded by the SCR (Selective Catalytic Reduction) pollution control system, fitted as close as possible to the engine for the fastest possible post-treatment action. As a result of all this, the 1.5-litre BlueHDi 100 diesel manages up to 64.6mpg and the 130hp version 62.7mpg, both variants managing up to 120g/km of CO2.

The Peugeot 308 SW is that rarest of things; a compact estate with genuine style. All too often cars in this class are horribly compromised, offer little in the way of genuine practicality over their hatchback siblings and look gawky and ill-proportioned. The 308 SW is sleek and stylish and in this improved guise, there's a reassuring aura of quality both inside and out. The asking prices are a little higher than we'd like, but aside from that, there aren't too many caveats. As long as you don't miss the fact that this generation model doesn't offer a seven-seat option, there are no complaints about the SW's practicality, its load bay being considerably more spacious than that of a Ford Focus estate. Residual values look to be firming up nicely for this latest generation 308 too. Peugeot looks to be well and truly back at the top table.