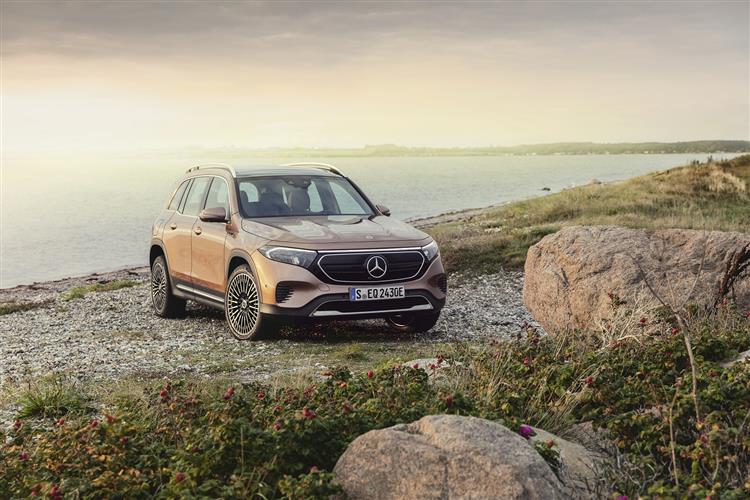 Think you know the EV market? OK, here's your starter question. What's the one thing that all the recently launched compact-to-mid-sized full-electric models out there all have in common? Answer: none can be ordered with seven seats. Except one: this car, the Mercedes EQB. If you do know your EVs, then you might have guessed (a) that this is the electric version of the brand's conventional GLB SUV. And (b) that this car shares all its engineering with Mercedes smallest electric vehicle, the GLA-based EQA. Right on both counts. The EQB was originally going to be assembled alongside little smart citycars at the Mercedes-owned factory in Hambach, France, but now that this plant has been sold to British manufacturer Ineos for production of its new Grenadier SUV, the EQB instead rolls down the same production line as its GLB stablemate in Kecskemet in Hungary. Enough background. Time to check out what this car is all about.

Mercedes launched this car with the two perkier powertrain packages available in the EQA, both of which feature 4MATIC four-wheel-drive. The EQB 300 4MATIC uses a 219bhp dual motor set-up, while the EQB 350 4MATIC has a 288bhp version of the same drivetrain. If you need a more affordable option, you can talk to your dealer about an EQB 250 variant with front wheel drive and 188bhp. As in an EQA, all models use a 66.5kWh battery, which in the '300' and '350' variants delivers up to 257 miles from a full charge. Mercedes promises that a longer range model with around 300 miles of range will be with us shortly. Both of the 4MATIC variants offer rapid acceleration, particularly the EQB 350, which gets to 62mph in 6.0 seconds, 1.7 seconds quicker than its 4MATIC stablemate. As with most EVs, maximum speed is restricted, here to 99mph. Setting off in this Mercedes feels all very normal. There's the same kind of starter button and column-mounted auto gear lever that you'd find in any normal combustion engine model in the Stuttgart maker's range. To maximise range, you'll need to make proactive use of the various brake regenerative energy harvesting modes on offer. The most aggressive setting is 'D - -', in which you feel sharp retardation whenever you come off the throttle. That's useful in town, meaning you hardly ever need to use the brakes, except when coming to a complete stop. The least aggressive setting is 'D+', in which the car coasts without any perceptible off-throttle braking, maintaining momentum.

You'd certainly pick up this car's similarity to its GLB counterpart if you happened to know the Mercedes product range. As with the EQA, the EQB delivers a subtle reworking of the combustion engined car it's based on. Which means a boxy profile embellished here with a more aerodynamic front end featuring the usual Mercedes EQ-specific closed-off grille and headlight signature. In the same way, the tailgate gets a full width LED tail light bar, as with other EQ models. Inside, it's also much as you'll find in a GLB, apart from a few trimming changes and the addition of specific 'EQ' electric vehicle menu for the centre screen, which is 10.25-inches in size, like the adjacent instrument binnacle display. There's comfortable space for a couple of adults on the back seat - and room for three at a squash. The key difference with an EQB though, is its relatively lengthy 2,829mm wheelbase, which allows it to offer an optional third row of seats, though Mercedes warns that these are only really suitable for children. Fold those seats down and you'll get 465-litres of boot space. If you opt not to have them, that rises to 495-litres of carriage capacity. Think in terms of about 75-litres less than you'd get in a GLB.

Expect to pay around £52,000 for the EQB 300 4MATIC; you'll need a budget of around £54,000 for a top EQB 350 4MATIC. That's with base 'AMG Line' trim in each case; there's a £3,000 extra to pay for plusher 'AMG Line Premium' trim. The front-driven EQB 250 model you can talk to your dealer about will probably require a budget in the region of about £48,000. You'll need to pay extra for the addition of the third seating row that most buyers will probably want. So, premium pricing - but then you probably expected that. At least you get plenty of kit for that, including the ritziest version of the brand's Widescreen MBUX infotainment set-up, with twin 10.25-inch displays for the central screen and the instrument cluster, both of which feature EQ branding and special graphics. Top models get niceties like an electrically-operated panoramic glass sunroof, a Keyless-Go Comfort package, an augmented reality navigation system, an advanced sound system and wireless charging for compatible smartphones. There's plenty of cutting-edge driver assistance technology too, including 'Lane Keep Assist', which subtly corrects your steering on the highway if necessary; and the usual 'Active Brake Assist' system. If you want more, then as usual Mercedes offers an optional 'Driving Assistance Package' which includes the choicest parts of its camera assistance technology and autonomous driving tech. The usual range of Mercedes me connected services are also available.

The elephant in the room here is driving range. The 260 mile figure you get from both the EQB 300 4MATIC and the EQB 350 4MATIC really isn't that much more than you'd get from a Renault ZOE supermini EV from the next class down. It's not improved upon that much by the more affordable EQB 250 front-driven model either. And whichever variant you select, you're going to need to make pretty proactive use of the brake regenerative settings to what is possible. The EQB will at least support both 11kW AC and 100kW DC charging. The 100 kW DC on-board charger allows the car to charge from 10 to 80 per cent in around 40 minutes, and from 10 to 100 per cent in five hours and 45 minutes using an 11kW wall box. Navigation with Electric Intelligence - included as standard - calculates the route that will get the driver to their destination fastest, taking into account charging times, and taking the stress out of route planning. A three-year subscription to the Mercedes me Charge public charging service is also included. With Mercedes me Charge, customers have access to what is currently the world's biggest charging network: this currently comprises more than 450,000 AC and DC charging points across 3 countries. Mercedes me Charge allows customers convenient use of the charging stations of various providers, even when travelling abroad. By registering just once, they can benefit from an integrated payment function with a simple billing process. Mercedes me Charge enables customers to charge at more than 175,000 public charging points throughout Europe; Mercedes-Benz ensures a subsequent offset with green power.

We feel much more convinced by this EQB then we did by its EQA stablemate. Mainly because this more versatile design has a unique selling point denied not only to the EQA but to every other compact-to-mid-sized EV out there: seven seats. You don't have to have them in a GLB, but we can't really see why you wouldn't. Larger families who don't want a hulking great van-based EV People Carrying bus can now join the electric vehicle revolution. What'll they find here? The usual eye-catching Mercedes front-of-cabin experience, classy screen technology and the rather smug sense of self satisfaction that comes in having a car with the Three Pointed Star on your driveway. EV range isn't particularly noteworthy here, but it's good enough in a car that's simply packaged better than its rivals; hence that seven-seat capability. In the best full-electric Mercedes model we've seen so far.