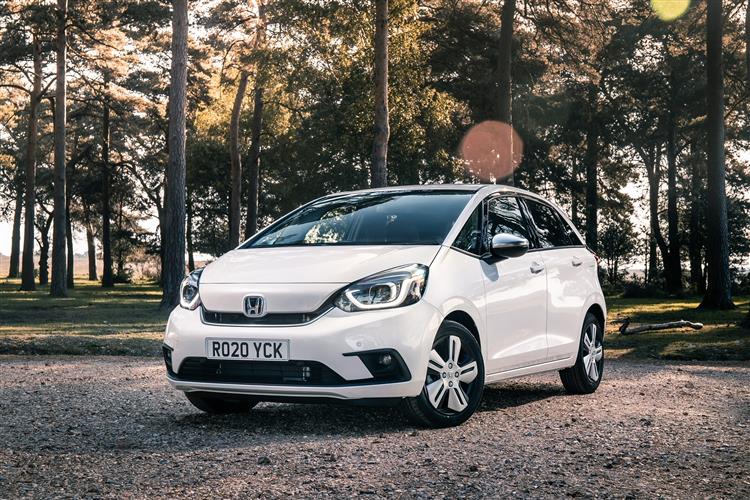 This Jazz supermini is the first car in Honda's current line-up to go hybrid-only - but it won't be the last. The brand's i-MMD full-hybrid system, first seen on the CR-V, has been more compactly packaged for this installation. And the designers have worked hard to ensure that it doesn't impinge upon the flexibility of the 'Magic seat' interior design package that has given previous generation versions of this model a supermini-sized car with much of the greater practicality of a larger family hatchback. Honda accepts that it might take this typically older clientele to get on board with the hybrid concept but expects that to happen pretty quickly. So what's on offer here? Let's find out.

The Jazz comes only with one engine - the brand's e:HEV powertrain. This is a full-Hybrid unit - so properly electrified like a Toyota Yaris Hybrid, rather than being only mildly electrified like the MHEV unit you can now have in a Ford Fiesta. The difference is important because a full-Hybrid can have far more reliance on battery power, especially in urban conditions. In this case, it's a 1.5-litre unit putting out 108bhp which uses two electric motors and a compact lithium-ion battery pack. The combustion engine sends drive through a clever fixed-gear auto transmission which Honda reckons is smoother and more efficient than the type of belt-driven CVT set-up the Jazz had before (and the one that Toyota uses in its hybrids). Basically the whole set-up is a downsized version of the 2.0-litre electrified engine used in the CR-V Hybrid and as there, you get selectable drive modes. Most of the time at the wheel of this Honda you'll be in 'Hybrid Drive', which combines the engine and the battery pack in the most efficient way possible while recovering electricity from deceleration and storing it for future use. 'EV Drive' forces the Jazz to run in electric-only mode (though it can only do that for very short distances). And the 'Engine Drive' setting combines the petrol engine and the electric motor output for maximum performance. In this mode, the e:HEV powertrain gives the Jazz a 0-62mph time of 9.4 seconds and a maximum speed of 108mph.

Honda has changed just about everything possible on the outside but it's a Jazz and you know what? It still looks like a Jazz. Slightly bulbous and unthreatening it remains but some of the detailing is now a bit sassier. At the front, the split A-pillars are designed to improve forward visibility and there's a pair of larger headlights and a chunkier bumper compared to the old model. It's still pretty compact though, measuring in at about 4-metres in length. At the rear, the previous model's vertically-stacked lights make way for more conventional horizontal units. Choose the SUV-inspired Jazz Crosstar model and you get roof rails, an elevated ride height, black plastic cladding around the wheel arches, two-tone paint and a bespoke grille, all in an attempt to introduce more of a Crossover vibe to this supermini. Inside, there are wider 'body-stabilising' front seats supposed to reduce fatigue on longer journeys and the dash has a more minimalist, uncluttered look. Its centre touchscreen has smartphone-style swipe technology and incorporates wireless 'Apple CarPlay'/'Android Auto' smartphone-mirroring. There's also a digital instrument cluster. Perhaps the best news though, is that Honda's clever 'Magic Seat' design remains in the rear, giving owners the option of either folding the rear bench flat or flipping up the seat bases to create a taller load space. Boot capacity is 298-litres with the rear seat in place - or 1,203-litres with it folded.

Prices start from around £19,500 for the entry-level 'SE' variant. You'll need a further £1,500 to get the mid-range 'SR' variant, while the plusher 'EX' derivative costs from around £22,500 and the ritziest 'Style' derivative is up at nearly £29,000. There's also a crossover-themed Jazz Crosstar model, which will set you back from around £24,000 upwards. Across the Jazz range, standard features include adaptive cruise control, lane keep assist and automatic headlights, plus there's 'Apple CarPlay' and 'Android Auto' smartphone-mirroring. Black paint will be the default cost-free option while six other paint shades are also available. The Crosstar version is exclusively available in two-tone combinations with a gloss-black roof. Infotainment and connectivity benefit from a much improved voice command system, the Honda 'Personal Assistant', first seen on the little Honda e. This is basically a next-generation voice control system in that it can respond to multiple commands: for instance "OK Honda, find me an Indian restaurant with WiFi and free parking". The set-up would then display suitable options on the fascia's central touchscreen before plotting a route to the chosen destination. With this car, Honda is also offering the latest version of its Honda+ smartphone app, which includes remote vehicle locking and unlocking, plus 'intelligent geofencing', which alerts an owner if the vehicle breaches a pre-set 'geofence' zone. Plus there's the ability to send journey information from the app to the car's navigation system.

You'd hope that with all that hybrid technology on board, this Jazz would be a frugal thing and, by and large, it is. The standard model has claimed WLTP-rated combined cycle economy and emissions figures of 62.8mpg and 102g/km. For the top Crosstar variant, the figures are 58.9mpg and 110g/km. Many customers will want to budget ahead for scheduled maintenance with fixed-price scheme called 'Five'. It includes five years' worth of maintenance, an extended warranty for this period and roadside assistance breakdown cover should the unexpected happen. This can be transferred to a new owner if you sell the car before the service plan has expired. Residual values are expected to be significantly better than most other supermini segment rivals. And the three year 90,000 mile warranty is better than the package you get from many competitors too. In addition, surface corrosion is covered for three years, exhaust corrosion is covered for five years, chassis corrosion is covered for ten years and structural corrosion for twelve years.

Honda does things differently - and we can't help liking that. Whether the model in question is a Civic, a Clarity fuel cell vehicle or a Type R hot hatch, you'll find that it's been uniquely engineered and packaged - as is the case with this Jazz. This always used to be the supermini that motoring experts would recommend as the small car they'd buy with their own money. For us, it still is. Despite this MK4 model's fresh hybrid tech, the packaging of this design remains difficult to beat. Yes, rivals have become classier, more dynamic and more up-market. Whether they're also better where it really matters though, is quite another question. For its loyal, dedicated band of buyers, this Jazz always will be. Try one and you'll understand.