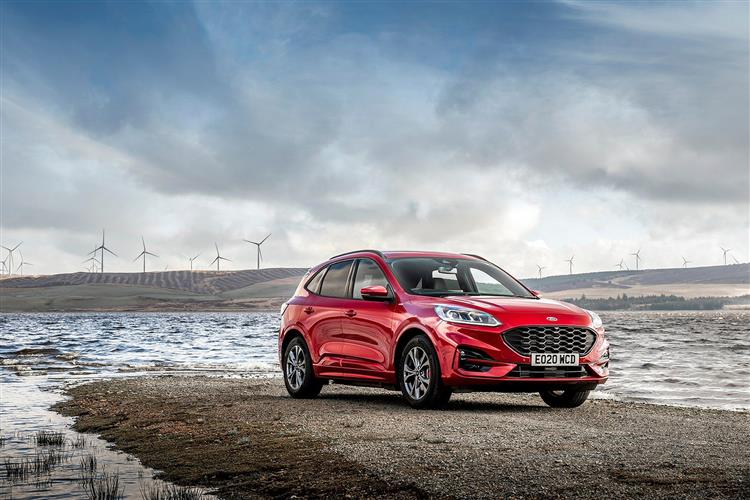 Ford's first plug-in model, the Kuga PHEV, offers all the usual virtues common to this kind of technology, plus a few of its own. Jonathan Crouch takes a look.

Perhaps being a market leader is about following established trends rather than pioneering new ones. Ford certainly seems to work that way. The Blue Oval brand didn't really establish any sort of real presence in the SUV sector until the second generation version of its mid-sized Kuga crossover model was facelifted in 2016. And it's taken the company until the 21st century's third decade to launch its first volume made EV (the Mustang Mach-E) and its first plug-in car, the Kuga PHEV model which is our focus here. This is the third generation Kuga, moved subtly up-market to make space for the freshly introduced Puma crossover which slots in below this model. It's just as well the Canadian-built Edge SUV is no more as the Kuga PHEV's asking price would have trampled all over it and is knocking on the door of premium territory.

Unlike the mild hybrid model in the Kuga range (which is a 2.0-litre diesel), this PHEV variant is petrol-powered. Ford didn't have a Euro-market green pump-fuelled engine that was suitable for plug-in tech, so has borrowed for this installation a 2.5-litre unit that it uses with the US market 'Escape'-branded version of this car. This engine is paired with a 108bhp electric motor, resulting in a useful total output of 222bhp, with the electrified element of the whole set-up powered by a decently-sized 14.4kWh lithium-ion battery and the whole shooting match mated to a CVT automatic gearbox. Keep the battery cells topped up and theoretically, up to 35 miles of WLTP-rated electric driving range is possible, though a 25-28 mile range expectation is probably more realistic. You'll need to get your head around all the drive modes. As well as the usual 'Normal', 'Eco' and 'Sport' settings, there's also a 'Slippery Deep Snow/Sand' mode - which is curious because unlike its PSA Group Plug-in SUV rivals, this Kuga PHEV can only be had with front wheel drive. There are also four further settings for the electric drivetrain: 'EV Now' focuses the drivetrain on all-electric output; 'EV Charge' (rather inefficiently) tops up the battery using the engine; and 'EV Later' holds the current state of charge so that you can save it for urban driving you might want to do later in your trip. Most of the time though, you'll simply leave the car in 'EV Auto', where clever electronics determine the most efficient use of engine and battery power. You can boost brake regeneration (and therefore energy harvesting) by clicking on an 'L' button on the gear selector. And in theory, it's possible to drive at up to 85mph on battery power alone. With the full powertrain working, 62mph from rest takes 9.2s en route to 124mph.

There are no really obvious visual giveaways that this plug-in variant is the PHEV model in the range - unless you're sharp-eyed enough to spot the extra flap for the charging point. If you're not familiar with this third generation design, you'll find it to be significantly bigger than its predecessor, 44mm wider and 89mm longer with a wheelbase increased by 20mm. At the wheel, it's much as it would be in a Focus hatch, with the usual 8-inch centre-dash SYNC 3 infotainment touchscreen. Upper-spec Kuga variants though, differ from their Focus counterparts in their provision of a 12.3-inch digital instrument cluster. Because this third generation Kuga model's C2 platform was designed around an electrified remit, there are no special compromises for rear seat passengers over the conventional models and you still get a rear bench that can slide back and forth over 150mm, allowing you to choose between legroom and luggage space behind. Which is just as well because luggage space behind is significantly reduced by the plug-in package down from 475 to 411-litres. Slide the rear seat forward as far as it will go (in which case there'll be very little legroom for back seat folk) and there'll be 581-litre of room (down from 645-litres normally).

We normally start this section with fuel and CO2 stats but perhaps of greatest interest to a potential Kuga PHEV buyer will be this model's Benefit-in-Kind taxation rating, a lowly 10% banding that will rise by just a single percentage point over the first three years of ownership. That's thanks to a WLTP-rated CO2 emissions figure of 32g/km. To give you some perspective here, the alternative Kuga 1.5 EcoBlue diesel automatic model emits 145g/km of CO2, which translates into a lofty 36% banding (which is only a single percentage point off the highest-polluting models in the range). In short, it's not difficult to see the appeal of the PHEV drivetrain. Particularly when you take into account the quoted WLTP-rated combined cycle economy stat - 201.7mpg. As with any plug-in hybrid, this fantasy figure reading has no actual relation to what you'll achieve in day-to-day driving reality, which probably won't be that much different to what you'd get from the comparable diesel variant. And obviously, if you neglect to charge the car up, you'll simply be driving a heavy petrol-powered SUV, in which case you'll be lucky to see around 35mpg in regular use. But a typical Kuga PHEV owner will want to get to grips with the charging regime that will make the sums add up here. There's no quick-charge capability as there would be in a full-EV. In fact, you won't even be able to use a public charge point unless you pay Ford £195 more for the relevant cable. The quickest you'll be able to recharge from empty is in 3.5 hours from a 7.4kW garage wallbox. A standard 3-pin plug will charge the car in around six hours.

Adding the weight and complexity of a PHEV system doesn't do the Kuga any favours in terms of either its handling or its price positioning. Ford though, is hoping that target market customers will think these drawbacks an acceptable trade for the not inconsiderable benefit of being able to slash taxation payments and being able to conduct almost exclusively electrified mileage. This car's growing array of mid-sized SUV plug-in rivals all have the same appeal of course, but this Kuga should feel a more interesting steer than any of them, despite its near-1.9-tonne kerb weight. Which is important. Just because your next family car might need to be in some way electric, it doesn't have to feel like some kind of domestic appliance. Ford knows how to create something better. And it shows with this car.