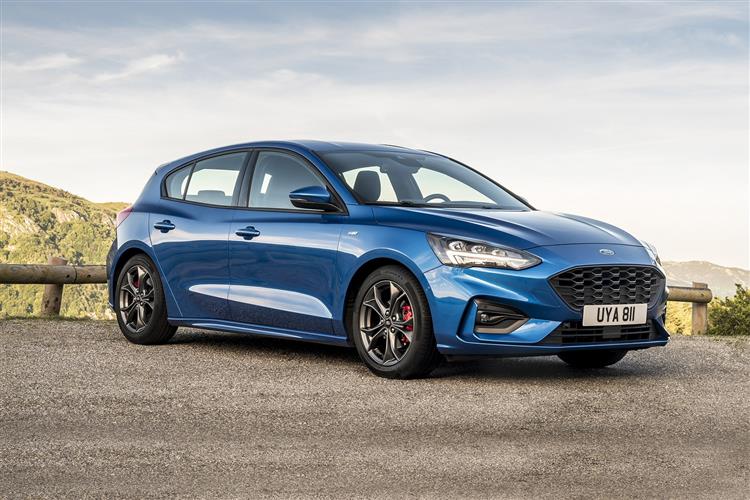 Ford has given its Focus family hatch a useful dose of electrification in EcoBoost Hybrid form. Jonathan Crouch takes a look

When it comes to family hatchbacks, electrification is really getting into gear, with full-Hybrid, Plug-in and full-electric options all available to the eco-conscious buyer prepared to pay the price for the technology on offer. But not everyone can stretch to cars like these. Ford says it can offer a more sensible solution and this is it, the Focus EcoBoost Hybrid. This model adds mild hybrid tech to the company's usual 1.0-litre EcoBoost three cylinder petrol engine to create a small but significant improvement in efficiency. And, at the same time, a perkier feel through the gears. All at very little increase in price over conventional levels. Sounds promising.

Hybrid engines aren't new in this class; Toyota has been offering one in its Auris (now badged the Corolla) since 2010. But they add what for many buyers is an unacceptably large price premium to cars of this kind - the cheapest, most basic Corolla hybrid does, after all, cost well over £24,000. What if a slightly more affordable approach into hybrid tech could be delivered that would be lighter, cheaper and more driver-orientated? Ford says that its 'mHEV' mild hybrid tech does just that. True, it's nothing like as efficient as a full-Hybrid, a plug-in Hybrid or a full-electric model - you'll find all three technologies represented right across this segment: make sure you know what you're buying. But in compensation, 'mHEV' tech boosts driver feel because it's lighter and it adds a slice of extra pulling power just when you need it. Simplicity's the keynote here, so the 1.0-litre three cylinder EcoBoost petrol powerplant this car features is essentially the same one Ford's been offering since 2011, more recently enhanced with cylinder deactivation tech which cuts down on cylinder use at low-to-medium throttle speeds. In mHEV mild hybrid form though, this unit gets a lower compression ratio and a larger turbo. And it's been embellished by a beefed-up starter/generator driven by a belt at the front of the engine that stores the energy harvested when you brake or decelerate in a tiny 48-volt lithium-ion battery secreted at the back of the car. Which provides a bit of extra zip when you accelerate (Ford says up to 50Nm of extra torque) and delivers a little electric boost from low revs to 'torque-fill' while you're waiting for the turbo to spool up. Most Focus EcoBoost Hybrid buyers will probably choose the 125PS version of this engine which gets to 62mph in 10.3s en route to 123mph. There's also a 155PS version of the same unit which improves those figures to 9.4s and 130mph.

Apart from the badgework, there are no real visual changes to distinguish this mild hybrid Focus variant apart from its conventional range stablemates. As usual, it's offered in both five-door hatch and estate body styles, with both also offered in crossover-style Active form with a slightly raised ride height. This fourth generation Focus has crisp and pleasing lines and it rides on the brand's latest 'C2' platform, which enables the wheelbase to be 53mm longer, freeing up extra cabin space. You should certainly feel that inside. Rear knee room has increased by 56mm over the old MK3 model and, thanks to a re-profiling of the rear doors, the rear passengers' heads are now adjacent to glass rather than metal, so they'll be able to see out more easily. Up-front, as you'd expect, it all feels of much higher quality. It's certainly difficult to fault the cleaner, sharper ergonomics of this fourth generation design, aided by a massive 50% reduction in button clutter, with as many functions as possible relocated to the prominent SYNC 3 infotainment screen that, in keeping with current automotive fashion, sprouts from the top of the dash. The extra body length has freed up more boot space too and, unlike most full-Hybrids and PHEVs, it's not reduced in size by the electrified tech. the capacity is rated at 341-litres to window level in the hatch or 575-litres with the estate. In the estate version, there's a class-leading 1.14m of width between the wheel arches a useful 1,700mm of overall load length with the rear seats folded. That means 1,650-litres of space.

Think in terms of a price point of just under £24,000 for the Focus EcoBoost Hybrid in 125PS form; that's with 'Titanium Edition'. 'Titanium X Edition', 'ST-Line', 'ST-Line-X' and 'Vignale' versions are also available along with various 'Active' derivatives if you've more to spend. As usual with the Focus, there's a choice of five-door hatch or estate body styles; most choose the five-door variant of course and if you do that, then you'll also be offered the option of the crossover-style 'Active' model we just referenced, with its slightly raised ride height, SUV styling cues and 'slippery' road drive modes. You can't (yet) have an auto gearbox with the EcoBoost Hybrid engine. Even base 'Titanium'-spec includes quite a lot. You get 16-inch alloy wheels, heated from seats, dual zone climate control, keyless entry and an auto-dimming rear view mirror. You also get Ford's 'SYNC 3' infotainment technology, which includes 'Apple CarPlay' and 'Android Auto' smartphone-mirroring and works via a 'floating' an 8.0-inch colour screen mounted on top of the dash. 'Zetec' variants are recognisable by their front fog lights and a smarter chromed finish on the upper door line. There's sophisticated safety too, including a Pedestrian Detection system that can even prevent collisions at night. And the option of 'Active Park Assist' with brake interventions to prevent low-speed collisions when parking hands-free.

We've explained how the mHEV system works in our 'Driving Experience' section but we'll further add here that the belt-driven integrated starter/generator is also able to aid the powerplant's stop/start system in urban traffic, restarting the engine in approximately 300 milliseconds - about the same as the blink of an eye. And the 'BISG' also enables the Focus EcoBoost Hybrid's Auto Start-Stop technology to operate in a wider range of scenarios for even greater fuel savings, including when coasting to a stop below 10mph - and even when the vehicle is in gear with the clutch pedal depressed. Thanks to all of this, the subsequent reduction in the amount of work required from the petrol engine results, says Ford, in a fuel efficiency improvement of up to 9%. So what does that equate to in terms of stats? Well, let's base this around the Focus EcoBoost Hybrid variant most will choose, the 125PS mHEV 1.0-litre EcoBoost Hybrid manual gearbox variant. This returns 55.4mpg on the WLTP combined cycle and up to 116g/km of WLTP-rated CO2. The 155PS version of the same engine manages the same figures. You'll need some class perspective here; most directly comparable conventionally-engined family hatchback-segment models deliver about 5mpg less and put out about 15-20g/km of CO2 more.

As long as you understand what you're actually getting here - a slightly more efficient combustion engine, not a proper full-Hybrid - there's lots to like about this lightly electrified Focus. That understanding will help put into perspective the fuel and CO2 benefits of Ford's mHEV technology. So you'll be pleased with these efficiency enhancements, rather than disappointed that they're not more Prius-like. It helps that the 1.0-litre EcoBoost engine being used here was already pretty efficient thanks in part to its cylinder deactivation technology. Many of the family hatchback segment models this Focus EcoBoost Hybrid derivative directly competes with on price have nothing like this level of engine sophistication at this price point. Add in this fourth generation Focus model's dynamic virtues and the deal you're likely to get from Britain's market-leading brand and you might well find the overall ownership proposition quite a compelling one.