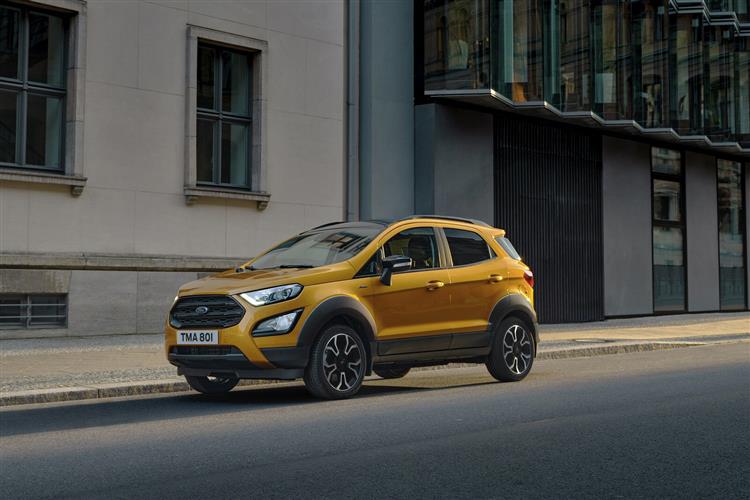 The Ford EcoSport gets a last throw of the dice in this lifestyle-orientated 'Active' form. Jonathan Crouch checks it out

Ford didn't rush into bringing us a supermini-based Crossover model. Indeed, the market was awash with the things by the time the brand brought us its own take in this genre, the Fiesta-based EcoSport, in the Spring of 2014. Since then, it's sold quite well, but never as well as the Blue Oval brand would have liked, despite a far-reaching update in early 2018 that changed over 2,360 parts. Today, the company's emphasis is on the similarly sized Puma model in this segment, but before the EcoSport finally departs, we've been given this trendy 'Active'-spec version. Is it worth a look?

The EcoSport Active only comes in front-driven form with the core engine used in this model range, Ford's innovative 125PS 1.0-litre EcoBoost petrol unit. It makes 0-62mph in 12.7s on the way to 112mph. The news that an EcoSport is based on a Ford Fiesta should certainly set you off in a positive frame of mind when it comes to the drive on offer. The issue though, is one of exactly what would happen to a Fiesta if you gave it a relatively lofty 190mm ride height, 136kgs of extra weight and a chunky high-riding body. After all, even Ford's chassis engineers aren't miracle workers, something which is fairly evident from the driving experience served up by this car. To be fair, the Blue Oval brand has much improved it, tweaking the springs, dampers and steering of this revised model in order to make it better suit European roads. And there have been some wins as part of that process. The consistent and well-weighted steering for example, is way better than before. Plus the brakes are impressive, the shift change of the 6-speed manual gearbox is slick and highway cruising is pretty refined. Ultimately though, what could be achieved here was rather limited by the high, boxy shape, a big contributing factor to the way the car feels uncomfortable with fast cornering or sudden directional changes at speed. It also rides quite stiffly on its firm suspension. Still, it's nothing you couldn't live with and most likely buyers won't want to drive on their door handles anyway.

You'll spot this 'Active' version of the EcoSport by its 17-inch Y-design dark-inset alloy wheels, black painted roof and rear privacy glass. Or perhaps by its black body kit, which sees that colour applied to the headlamp bezels, the wheel mouldings, the front grille bars and the lower body side claddings. You also get Sport halogen tail lamps. As usual on an EcoSport, the almost Aston Martin-style front grille looks good, the glasshouse is elegant, the headlights and wheel arch treatment is very deft and the stance of the car is better than it has any right to be. Inside, there's partial Sensico upholstery with leather inserts and blue stitching, but otherwise, the interior is like any other plushly-specified EcoSport. That means you get an 8-inch SYNC centre-dash infotainment screen which features navigation, 'Apple CarPlay'/'Android Auto' smart-phone mirroring. The rear seat of an EcoSport is a surprisingly pleasant place to be thanks not only to the high, airy roofline but also to the fact that the rear seats are set slightly above those in the front for a better view out. At the back, that side-hinged tailgate still accesses a load space that Ford reckons is big enough to swallow a 560-litre washing machine - once the 60/40 split rear seats are folded, that is.

Expect to pay from just under £22,000 for this top 'Active' variant - the same amount as Ford asks for an equivalent version of the 'ST-Line'-spec EcoSport model. As for equipment, well 'Active' customers get all the visual embellishments we talked you through in our 'design & Build' section. Plus 7-shade interior ambient lighting, climate control, cruise control, a centre console with a sliding armrest, an auto-dimming rear view mirror and a rear view camera with rear parking sensors. Outside, there's black roof rails, power folding mirrors, auto headlamps and rain-sensing wipers. The thing that rather gives away the reality that this isn't an all-new generation design is the fact that it can't be had with many of the camera-driven safety features you'll find with more recently introduced rivals. So you'll look in vain on the spec sheet for things like autonomous braking and lane departure warning. Some compensation here though, lies in the fact that every EcoSport comes as standard with the potentially life-saving 'Emergency Assistance' set-up that competitors would make you pay extra for. In the event of an accident, this system will automatically call the rescue services to summon assistance anywhere you might be in Europe. It's also worth mentioning that a' Blind Spot Information System' is available at extra cost - one of those set-ups that warns you if, on the move, you're about to dangerously pull out in front of another vehicle.

It's a lot harder to get a boxy Crossover model to return efficient fuel and CO2 returns than it is with a conventional supermini or family hatchback. To illustrate the point, let's take the 1.0-litre EcoBoost petrol-powered EcoSport Active model we're looking at here. The 125PS engine beneath the bonnet returns 47.9mpg on the combined cycle and 136g/km of CO2 - which is some way off the figures the same unit will deliver in a comparable Ford Fiesta - but probably acceptable, given the extra 136kgs of kerb weight this car must cart around. I mention kerb weight: Ford makes a lot of the way that this model's Boron steel construction reduces weight while increasing structural strength. That may be so but the fact still remains that an EcoSport weighs more than virtually all its direct segment rivals. When it comes too booking your EcoSport in for a check-up, you can do this online through the 'My Ford' portal. This is part of the 'Ford BlueService' scheme that wraps up all of the care and maintenance of your car into one bundle that also includes a free 30-point 'eCheck' of vital parts. Here, any work required will be highlighted with red, amber or green traffic light warnings on a report you'll be given that will rank items needing attention in order of their importance. There's also the 'Ford Service App' that you can download to your phone for free. It lets you locate your nearest dealer to make maintenance bookings.

The 'Active' package shows that this EcoSport still has a little life left in it. It won't handle anything like as well as a comparable Puma - or deliver that mild hybrid model's standards of efficiency, but if you don't really care very much about either of those things and you want a small Ford SUV, you'll find plenty to like here. The Active visual embellishment is well judged. And as with any EcoSport, at the wheel, you'll sit higher than you probably would in that alternative 'B'-segment SUV model you've maybe been thinking of. Ultimately, it's been hard for Ford to get round this model's fundamentally South American origins. But in this form, the EcoSport makes more sense than it ever has before.