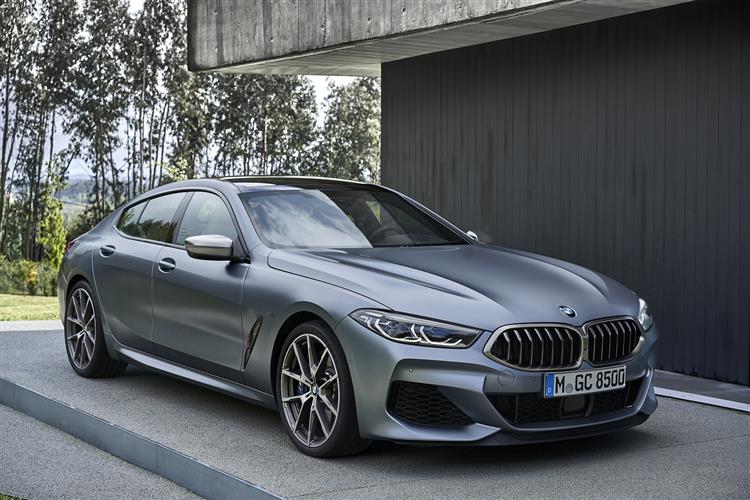 BMW's 8 Series Gran Coupe is both a stylised saloon and a coupe with a little extra versatility. There's nothing quite like it. Jonathan Crouch reports on the revised version.

So you want a luxury saloon. The thing is though, you don't want a boring one. One day perhaps, the time might be right for you to get something like a BMW 7 Series, a Mercedes S-Class or an Audi A8. For now though, you'd like something just as smart and luxurious but more individual and dynamic. Something, perhaps, like this, BMW's 8 Series Gran Coupe. This Gran Coupe is a lengthened four-door version of BMW's more conventional two-door 8 Series Coupe and was first announced back in 2012 badged as a '6 Series Gran Coupe' to plug an important gap in the Munich maker's luxury line-up. Buyers who'd out-grown the brand's 5 Series Executive saloon and didn't want to go on into something limo-like were being lost to a new breed of more style-conscious Luxury segment models - cars like Mercedes' CLS-Class, Audi's A7 Sportback and Porsche's Panamera. Targeting these people was still the brief for this four-door 8 Series model when it first arrived in 2019, then was subtly updated early in 2022. How effectively has this car's brief been executed? Let's find out.

Three 8 Series Gran Coupe engines are now on offer, the range kicking off with the 340hp 840i petrol version, the only one featuring rear wheel drive. The other two 'M' variants both feature xDrive 4WD as standard. There's an M850i derivative, which uses a 530hp version of the 4.4-litre twin-turbocharged petrol V8 you'll find in the brand's M5 super saloon. An M Sport exhaust delivers a snarly soundtrack, there's 750Nm of torque and 62mph from rest takes just 3.7s. If that's somehow not fast enough, you'll want to talk to your dealer about the even quicker M8 Competition model, which has the same 4.4-litre petrol V8 tuned up to 625hp, in which form it delivers 750Nm of torque. That flagship variant is capable of 62mph from rest in just 3.2s. The old 840d xDrive diesel variant is no longer offered. Across the range, there are the usual 'Driving Experience Control' modes - 'Eco', 'Comfort', 'Sport' and 'Sport+'. For a more focussed and sporty handling, Integral Active Steering is fitted as standard to reduce the turning circle when manoeuvring. This also increases agility at moderate speeds and optimises poise and assurance when changing lanes and cornering at high speeds. It becomes more direct as the speed builds but allows the driver to manoeuvre at low speeds with minimal steering wheel movement. Optional active roll stabilisation further enhances the handling characteristics. Electric swivel motors on the front and rear axles ensure particularly fast and precise compensation of lateral forces.

This updated 8 Series Gran Coupe now gets BMW's M Sport styling pack as standard, which gives the car a meaner look, with a more heavily structured front bumper and rear diffuser, as well as revised 19-inch wheels and upgraded brakes with blue calipers. Across the range, it's also now possible to order an illuminated front grille. The M850i model gets a unique front splitter and M8-style for the exterior mirrors, the rear spoiler and the diffuser. The M8 itself has redesigned 20-inch wheels. As before, the style of this 8 Series Gran Coupe is very similar to that of its Coupe and Convertible showroom stablemates, but it has a wheelbase that's 201mm longer in order to incorporate a couple of extra rear doors. Unlike obvious segment 'Grand Turismo'-style rivals like the Porsche Panamera and the Audi A7 Sportback (but like its closest competitor the Mercedes CLS), this BMW has a traditional notchback boot rather than a hatchback. And inside? Well the key change with this facelifted model is an upgrade in the size of the central infotainment screen - from 10.25 to 12.3-inches. And the six cylinder model gets multi-contour seats as standard. Otherwise, things are the same as before. As in other 8 Series models, the interior is awash with high-precision details and features a driver-centric cockpit and low-set sports seats featuring integral head restraints and trimmed in soft Merino leather. Despite the coupe-style pretensions here, this is a proper four-seater; there's certainly adequate head and legroom in the rear, even for loftier adults. The boot meanwhile (which has a high lip) is big enough for a quartet of adults too, being 440-litres in size (90-litres less than you'd get in a 5 Series saloon if you're wondering). Larger objects like skis can be dealt with by a through-loading hatch. If you need more room, then releasing a pair of neat boot sidewall catches flattens the rear seatbacks, a standard feature that can free up considerably more cargo space.

Prices start at around £72,000 for the 840i Gran Coupe. The M850i xDrive version is around £101,000. The M8 Competition xDrive model will set you back around £123,000. Across the range, equipment highlights include Merino leather upholstery, a Head-up display, Active Park Distance Control and the BMW 'Live Cockpit Professional' infotainment set-up, which includes a 12.3 inch instrument binnacle display screen and a 12.3-inch centre-dash monitor. Via this, you'll have access to an adaptive nav system, a hard-drive-based multimedia system with 20GB, two USB ports, plus Bluetooth and WiFi interfaces. A key new option is the illuminated front grille, offered with an 'Iconic Glow' package, which gives you an illuminated surround and waterfall lighting for each of the grille elements. You can also order optional M emblems in blue, purple and red in place of the traditional blue and white BMW roundel. Plus as before, there's plenty of cutting-edge camera-driven safety kit and autonomous driving tech. The driver assistance systems process camera images as well as data gathered by ultrasonic and radar sensors to monitor the vehicle's surroundings, to warn of potential hazards and to minimise the risk of an accident with corrective braking or steering inputs. The car is equipped as standard with Cruise Control with braking function, as well as Collision and Pedestrian Warning with City Braking, the latest version of which also alerts the driver when a cyclist is detected. Depending on the situation, the system can bring the vehicle to a halt to either avoid a collision or minimise its consequences.

Just because you're spending over £70,000 on a luxury car of this kind, it doesn't mean you'll be paying through the nose to keep it on the road. Even the M850i xDrive with its turbocharged petrol V8 is capable of 24.6mpg and CO2 emissions of 246g/km. The 840i sDrive enhances that to 33.2mpg and 186g/km. For the M8 Competition xDrive, it's 25.2mpg and 256g/km. Routine maintenance is dictated by 'Condition Based Servicing' that monitors oil level and engine wear, taking into account how long it's been and how far the car has travelled since its previous garage visit. To help plan ahead for the cost of regular work, at point of purchase you'll be offered a 'BMW Service Inclusive' package that lasts for three years and 36,000 miles. With this, after a one-off payment, you'll have the peace of mind of knowing that all normal work on the car has been paid for during this period, including items such as oil, spark plugs and filters. On to the warranty package. BMW offers a warranty that lasts for three years, no matter how many miles you complete. You can also insure your car through BMW, though as most 8s will be funded with company money through a lease deal, this brokerage fees are likely to be bundled into that.

Of all the motivations you might have for spending serious money on a full-sized luxury car, perhaps the most important is the need for it to make you feel special. And that's exactly how you'll feel with one of these in your driveway. It's what sets this executive four-door coupe apart from the kind of BMW 7 Series saloon you could have for much the same sort of money. And it's also what makes this a rarer, more exclusive choice than a rival Mercedes CLS or Audi A7 and a more beautifully resolved design than the only other two really direct alternatives, Porsche's Panamera and Maserati's Quattroporte. True, you do still need to spend plenty on the options list to create the 'ultimate driving machine' the Munich maker's ads promise. Do this though and you'll get yourself a car with dynamic capability no rival can match. So, in summary, is this the best luxury model BMW makes right now? There are some who would say so. And the best four-door premium coupe? Yes, that as well.