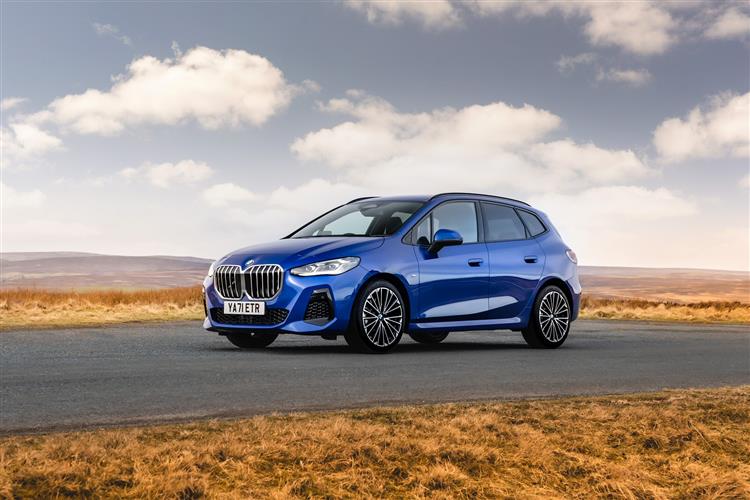 A brand new five-seat MPV people carrier design is rare indeed these days, especially if it isn't based on a van. But that's what we've got here in the sleeker shape of BMW's second generation 2 Series Active Tourer. Most of the volume brands have pulled out of this segment but the competitor model this Munich maker most cares about, the Mercedes B-Class, still does enough business in this sector to justify giving the Active Tourer model line a second crack at sales success. As before, the '2 Series' name is slightly misleading; this car has nothing in common with the rear-driven 2 Series Coupe. Instead, like its predecessor, this Active Tourer uses the front-driven FAAR architecture found in the BMW X1 and the MINI Countryman, the same platform chosen for the four-door 2 Series Gran Coupe. This time round though, the rather frumpy looks of the first generation Active Tourer have been swapped for something with a dash more panache.

You'd expect plenty of electrified tech in the engine range - and you shouldn't be disappointed. There's no full-EV or full-Hybrid, but both the conventional petrol engines get the brand's 48V mild hybrid embellishment. The system's starter generator provides a 19hp boost in power. There's a choice of a 170hp 1.5-litre three cylinder unit (the 220i model), or a 218hp 2.0-litre powerplant (the 223i). The conventional 218d variant with a 150hp 2.0-litre diesel features in the range too. As do a couple of three cylinder petrol plug-in hybrids, offering either 245hp (the 225e xDrive) or 326hp (the 230e xDrive), with both claiming an impressive all-electric driving range of up to 49 miles. All the powerplants on offer are mated to 7-speed Steptronic dual-clutch auto transmission. Whatever your choice of engine, BMW reckons you'll find this second generation model a lot more engaging to drive, thanks to extensive chassis revisions, sharper steering response and a fresh 3-link rear suspension setup. 'M Sport'-trimmed models also get Adaptive M Sport suspension, which has a 15mm drop in ride height, plus there's a quicker steering rack. Different drive modes can be selected through the iDrive 'My Modes' menu, the options being 'Efficient', 'Sport' and 'Personal'. Across the range, sleek aerodynamics should lower wind noise at speed. And a wider track will improve handling.

If we'd had this kind of 2 Series Active Tourer from the outset, there wouldn't have been much doubt about the need for a replacement model. This, the car in question, is more sharply proportioned in every way, extra overtaking presence coming courtesy of a larger front grille flanked by re-styled headlights now of the full-LED variety across the range. Revised side creases emphasise the profile, while slim LED tail lights embellish the rear. This is a larger car than before too, 32mm longer, 24mm wider and 21mm higher. Inside, it's even more different, thanks to design inspiration from BMW's flagship iX crossover large luxury EV. Hence the smart one-piece curved dash display that houses a 10.25-inch digital instrument cluster and a 10.7-inch central touchscreen, the latter running the brand's latest eighth generation iDrive infotainment system. This middle monitor has inhaled most of the previous model's switches and buttons and is much cleverer, with over-the-air software updates, wireless phone mirroring and more intuitive 'Hey BMW' voice control. The wheelbase length - 2670mm - remains the same as before, but BMW still claims more interior space, thanks to the adoption of a more compact 3-link rear suspension set-up. As before, the rear seats can recline - or move backwards and forwards. And they split 40:20:40 to aid cargo flexibility. Boot space is 415-litres for petrol models and 470-litres for the diesels, with respective seats-folded capacities of 1405 and 1455-litres. That falls to 1370-litres with the plug-in hybrids.

The 2.0-litre turbo diesel engine that many customers will inevitably gravitate to in the 218d variant makes some extremely good numbers, recording up to 58.9mpg on the combined fuel economy cycle and up to 125g/km. If you'd prefer petrol, you'll get access to BMW's 48v mild hybrid tech, which massages the efficiency figures a bit. The 1.5-litre 220i manages up to 47.9mpg and up to 133g/km. While the top 2.0-litre petrol 223i manages up to 47.1mpg and up to 137g/km. If you want to do better, you'll need BMW's Plug-in hybrid technology, which consists of a current-excited electric motor installed in a single housing along with the power electronics and transmission. In both PHEV models, the electric motor acts on the rear wheels while a three-cylinder petrol engine drives the front wheels. Maximum charging capacity is up from 3.7kW to 7.4kW, meaning that a full charge can be delivered in around 2.5 hours, or just under 8 hours via a conventional household socket. Electric range is up to 49 miles based on the WLTP cycle.

The first generation 2 Series Active Tourer brought a bit of class to the 5-seat MPV segment, but was rather plain and dumpy, both to look at and to drive. You'd be far more likely to covet this MK2 model, were you to be a family customer whose need for people carrier was somewhat uncomfortably paired with the need for a BMW. The improved looks remind you of the kind of effect visited upon someone you used to know who since has had a very productive couple of seasons in the gym. Perhaps a few semesters of night school too; this second generation design has, after all, reached a whole new level of intelligence when it comes to media connectivity, camera safety provision and electrified engine tech. And the result is that rare thing; an MPV that might even engender an SUV-like trendy ownership vibe. With the right spec and extras of course. A bog standard 2 Series Active Tourer still isn't going to get the neighbours' heads turning. But the one you may now have in mind just might.