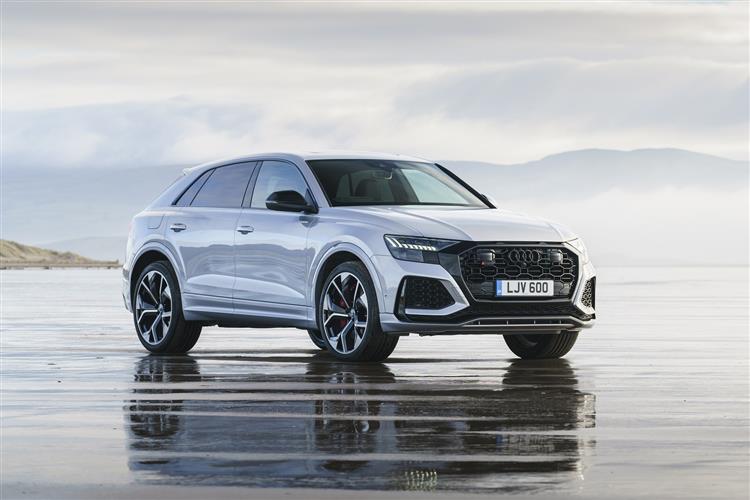 Audi's fastest SUV aims to re-write just what's possible for a car of this kind. Jonathan Crouch takes a look at the RS Q8.

I'm not quite sure what your idea of the ultimate money-no-object performance luxury SUV might be, but it's quite likely that it has a VW Group-sourced twin turbocharged 4.0-litre petrol V8 beneath the bonnet. That engine's common to the Porsche Cayenne Coupe Turbo, the Lamborghini Urus and this car, the Audi RS Q8. The other potential contenders for your sizeable cheque in this segment are also V8s, the BMW X6M Competition and the Mercedes-AMG GLE Coupe 63S. All are extreme, all are very fast and all are difficult to justify in a world of melting polar ice caps. But I'm guessing that if you're reading this, you'd love to own any one of them. But why this Audi in particular? Well it's the fastest SUV around the infamous Nurburgring Nordschleife racetrack (7m 42.253s if you're interested), so there are bragging rights with that. Perhaps more significantly, on paper at least, it's got more power than the Porsche, it's vastly more affordable than the Lamborghini and there's more technology than the BMW and Mercedes. Sounds promising. If for you, Audi's 507PS SQ8 isn't quite enough, here's an uber-fast Audi SUV that will really get your blood pumping.

Let's start with that 4.0-litre twin turbo V8 petrol engine, which here develops 600PS, a little more than it does in the Porsche Cayenne Coupe Turbo and a little less than it does in the Lamborghini Urus. It's enough to somehow convey this huge 2.3-tonne SUV from rest to 62mph in just 3.8s and you'll need only around 10 seconds more to get to 125mph, on the way to a maximum (where unrestricted and only for the very brave) of 190mph. Drive is delivered via an 8-speed tipronic auto gearbox to a quattro 4WD system that can apportion up to 80% of torque to the rear (though 40:60-split front-to-rear is its usual setting) and to manage it all, there's an active torque vectoring limited slip differential. Lots more has also gone on to help handle all that power. You get a wider track (10mm more at the front and 5mm more at the rear) for a squater stance - and there are bigger brakes of course. And revised damper rates for the adaptive air suspension. Standard or optional depending on trim are two further features: a 48V anti-roll system and a four-wheel steer set-up that reduces cornering understeer and promotes the kind of turning ability you'd think would be impossible for a car of this size. There's the usual drive mode system and your favourite blend of attributes can be stored and summoned by pushing the provided RS button on the steering wheel which has two settings; RS1 (where perhaps you'd store your more laid-back settings) and RS2 (for when you want to select a more aggressive demeanour).

There's plenty of pavement theatre here, as you'd expect from a coupe-style large sporting SUV, especially one this powerful. Specific touches here include RS bumpers, RS widened wheel arches, RS dual-branch tailpipes and an RS Manhattan grey front spoiler lip and rear diffuser insert. Plus the imposing octagonal single frame front grille gets a Manhattan grey surround. HD matrix LED headlights flank the grille and at the back, there's the full-width light strip which is characteristic of all high-end Audi models. Depending on the spec level you choose, the wheels are either 22 or 23-inches in size. At the wheel, the interior highlight lies with Audi's superb winged Super Sports seats, which are trimmed with diamond-stitched Valcona leather upholstery. As usual in a large luxury Audi, the centre part of the fascia is made up of two large touchscreens with haptic and acoustic feedback. The upper display, which is integrated in a large high-gloss black bezel, is almost invisible when switched off and is used to control the infotainment and navigation systems. You'll use the lower display for managing the heating and air conditioning functions, as well as convenience features and text input (which can be done with your fingertips). As you'd expect, the Audi Virtual Cockpit screen for the instrument binnacle is standard and the top variant gets a head-up display too. Unlike the SUV this model is based on, the Q7, this design can't offer a third seating row, but Audi insists that there's ample room for three people across the back seat, pointing out that the interior space exceeds that of the direct competitors in almost all relevant dimensions. The 'rear bench seat plus' package is standard, which means that the rear seat can slide and recline. The luggage compartment holds 605-litres, which increases to 1,755-litres with the rear backrests folded down. Two golf bags can easily fit in diagonally.

There's a big step of just over £20,000 to go from the 3.0-litre TFSI-powered 507PS SQ8 to this petrol-powered RS Q8 model. The standard RS Q8 costs around £102,000, but many potential buyers will want to upgrade. Either to the 'Carbon Black' variant with its meaner look and RS sport exhaust system, which from launch was priced from around £112,500. Or possibly to the RS Q8 'Vorsprung' flagship version, which costs around £120,000. And as a variant you have to have to get four-wheel steering and the 48V anti-roll system. Standard equipment includes RS sports seats, rear privacy glass, a multi-coloured extended LED interior lighting pack, a power-operated tailgate, Advanced Key' keyless entry and the 'Audi Virtual Cockpit' instrument binnacle screen. Plus of course there's a whole host of camera driven safety features, though plenty of additional ones also reside on the options list. Talking of options, there is of course, lots of scope to pay more. With the standard RS Q8, you can add red brake calipers and aluminium roof rails, plus a panoramic glass roof. Unless you're buying into top 'Vorsprung' specification, you'll also want to consider the 'Comfort and sound pack' which, for just over £2,000 more, adds a Bang & Olufsen premium sound system with 17 speakers and 730 watts. Plus heated front and rear outer seats, a 360-degree surround view camera and a 'Park assist' system that guides you into spaces.

You won't be expecting this RS Q8 to be inexpensive to run - if that was at all an issue for you in buying a high performance Q8, you'd be more likely to consider the lesser 507PS SQ8 petrol version of model. With this RS Q8, you're looking at a WLTP-rated combined consumption figure ranging between 20.0-20.5mpg. And a WLTP CO2 emissions reading of 320-314g/km. Servicing your RS Q8 should be no more taxing than is the case with one of the company's smaller cars. As usual with Audi models, there's a choice of either a 'Fixed' or a 'Flexible' servicing regime, the choice between the two depending on the extent of your likely annual mileage. The 'Fixed' schedule is aimed at drivers covering fewer than 10,000 miles a year and includes an oil change service every 9,000 miles or every year, plus an inspection service every 19,000 miles or every two years. If you cover more than 10,000 miles a year, the 'Flexible' service schedule will be more appropriate, this regime including oil change and inspection services at variable intervals of up to every 19,000 miles or every two years. We'll finish by covering the warranty. All cars in this class get three years of cover, but whereas BMW and Mercedes don't limit your mileage in this period, Audi rather meanly restricts you to 60,000 miles. Optional extra-cost packages can extend the cover to either four or five years.

It's hard not to admire what this RS Q8 can do. It would be astonishingly quick on race track and fantastically fleet point-to-point on a twisting country road. You could even take it off road - the air suspension raises the whole car by 50mm for greater ground clearance on rough tracks. And towing will be straightforward too. Given this six-figure asking price, I was a bit disappointed that key driving aids like four-wheel steering and the 48V anti-roll system don't come as standard; you'll need these to be able to experience everything this RS Q8 can really do. But when fully kitted out, this car can give you almost everything you get in a Lamborghini Urus for £40,000 to £50,000 less. Which in turn, makes it very special indeed.