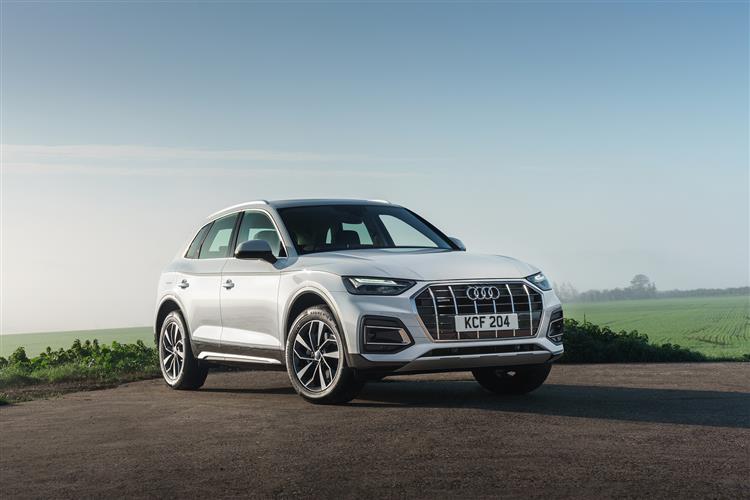 Three models dominate the executive mid-to-large section of the premium-badged SUV sector and this is one of them, Audi's Q5. It's almost faced stiff competition from its two arch-rivals, the BMW X3 and the Mercedes GLC but looks stronger against them thanks to the package of mid-term updates visited upon the revised Q5 model range we're going to look at here. Some things haven't changed though. As before, this is the kind of compact SUV you buy if you want something that'll look great in the driveway, keep you mobile in a snowy snap and shrink around you when a twisting road opens up ahead. It's a demanding brief that around three quarters of a million global owners feel was delivered on by the earlier versions of this car. But is this latest version good enough to continue to ask questions its rivals may struggle to answer? That's what we're going to find out.

This isn't the most dynamic-handling premium-badged mid-sized SUV you can buy but it's arguably the one that rides best and is most refined. S tronic auto transmission and quattro 4WD are standard across the range. The key news on the engine front is the arrival of a lighter, cleaner, more powerful 2.0-litre TDI diesel engine for the 40 TDI quattro variants that most Q5 customers choose. Power for this powerplant has increased from 190 to 204PS and this unit now uses the brand's latest, more efficient so-called 'twin dosing' catalytic converter technology. The conventional engine alternative is a 45 TFSI 245PS version of the brand's 2.0-litre petrol turbo. You may not have yet caught up with the fact that the SQ5 sporting model is now a mild hybrid 3.0-litre diesel (with 341PS and 700Nm of torque) and capable of 62mph in 5.1s en route to 155mph. You also may not be up to date with the fact that the Q5 range offers a TFSI e Plug-in hybrid option which uses a that 2.0-litre TFSI petrol turbo unit mated to a rechargeable 14.1 kWh lithium-ion battery capable of providing a WLTP-rated electric driving range of up to 38 miles. This Q5 PHEV is the 50 TFSI e variant, which offers 299PS and makes 62mph from rest in 6.1s en route to 148mph. For the TFSI e powertrain, there is of course the option of the sleeker Sportback body shape and if you choose that, you can have firmer sports suspension; as with the standard model, you can upgrade that with either adaptive damping or full air suspension on request.

Specific hallmarks distinguish the latest members of the growing Audi Q crossover family from the core range and this updated Q5 now moves more closely into step with them visually. It comes in two forms - standard SUV and trendier Sportback form. If you stick with the standard SUV version, although the width and height of this mid-size SUV remain as before at 1.89 metres and 1.66 metres respectively, you'll find this Audi now 19mm longer at 4.8 metres, primarily due to its new, larger bumpers. To emphasise this car's Q credentials from the front, its octagonal Singleframe grille is shallower and appears wider than before. And the air intakes that flank it have grown in height and are now structured by trapezoidal insets. The headlights have a new daytime running light signature and there's wider availability of Audi's intelligent 'Matrix' beam technology. In profile this latest Q5 has a more streamlined look thanks to its redesigned sill insert. And at the rear, there's now a smart chrome trim element running between the light clusters and a redesigned lower diffuser insert too. Inside, the expansive sweep of the two-section dashboard bisected by its sculpted trim inlay will be familiar to Q5 drivers, as will the freestanding MMI display. Closer inspection will reveal that the monitor itself is now larger, measuring 10.1-inches diagonally across the range; but unfortunately, you have to do without the old lower rotary centre console controller that originally acted as the gateway to the MMI functions. Now it's necessary to either stab away at the touchscreen or use voice control. Still, the screen's processor now offers ten times more computing power than the old set-up. And the previously optional 12.3-inch fully digital Audi Virtual Cockpit instrument binnacle display is now standard. Otherwise, things are much as before. This remains a five-seat model and the rear seat is split into three segments. Longitudinal and seat back angle adjustment are optional. In the Sportback version, rear seat passengers lose 1-2cms of headroom to the sloping roofline. Depending on the rear seat position, the basic volume of the standard SUV version's luggage compartment ranges from 550 to 610-litres. When the rear bench is folded down, this volume grows to 1,550-litres. For the Q5 Sportback, the figures are 510-litres and 1,480-litres.

The price positioning of this second generation Q5 hasn't changed very much, so prices start at around £45,000 and the mainstream range is based around 'Sport', 'S line' and 'Vorsprung' trim levels. All variants now get a larger 10.1-inch centre-dash MMI infotainment screen and a standard Audi Virtual Cockpit 12.3-inch instrument binnacle screen. Even base 'Sport' versions get full-leather upholstery - there's alcantara and leather in the mid-range 'S line' versions or diamond stitched Fine Nappa leather with the top flight 'Vorsprung' trim. As befits their status, the 'Vorsprung' models also feature an extended upholstery pack which takes in the lower section of the centre console and the door armrests, plus full electric adjustment and a massage function for the front seats. The outer rear seats are also upgraded with heating to match the front seats - which are heated throughout the range. Across the range, you get front and rear parking sensors complemented by a reversing camera and cruise control, plus the 'Pre sense city collision avoidance and mitigation' system and 'hill descent control'. Q5 'Vorsprung' variants supplement this tally with upgraded adaptive cruise control and Pre sense systems, as well as assistants to take care of everything from manoeuvring into a parking space and then reversing out again to turning at junctions, monitoring blind spots and observing motorway lane boundaries.

This second generation Q5 took a big step forward in terms of efficiency - and that's reflected by the WLTP figures. The 40 TDI diesel variant manages up to 44.8mpg on the combined cycle and up to 165g/km of CO2. These excellent figures have been aided by the introduction of so-called 'twin dosing' catalytic converter technology for this variant's 2.0 TDI unit, which features dual AdBlue injection, significantly increasing emissions cleanliness. With 'twin dosing', AdBlue is injected upstream of two SCR catalytic converters arranged in series, with the result of cutting emissions of nitrogen oxide emissions by up to 80% compared with the previous 2.0-litre TDI engine. For the 45 TFSI petrol, the figures are up to 33.6mpg and up to 191g/km. Elsewhere in the range, the SQ5's 3.0 TDI diesel delivers up to 34.4mpg and up to 215g/km. For the 50 TFSI e plug-in petrol/electric variant, it's up to 166.2mpg and up to 39g/km. A relatively slippery (for an SUV) Cd figure of 0.30Cd helps here. And residuals? Well, trying to buy a used Q5 is quite a depressing experience as they cling onto their value with some tenacity. This is great news for the new buyer and part of a trend certain to continue with this MK2 model. After the usual three year / 60,000 mile ownership period, expect it still to be worth around 45% of what you originally paid for it.

Whether your destination is Sainsburys or the annual family skiing trip to Crans Montana, you'll feel better about doing it in an Audi Q5. In between, in contrast to larger, plusher and thirstier SUVs, you won't get that nagging feeling of using a sledgehammer to crash a nut when it comes to meeting your real motoring needs. Nor, when you're alone on a twisty B road, should you need to wish you'd bought something sportier. Of course, the improved version of this second generation model now faces much tougher competition, but the well considered package of changes made to this smarter, better equipped and higher-tech mid-sized premium SUV should keep it very competitive with cars like Mercedes' GLC and BMW's X3 in the chasing pack. Certainly it's not cheap - but then neither is anything else in this segment and at least you'll get a decent part of your money back at resale time. Resolutely hi-tech and resolutely real world, the Q5 remains resolutely right.