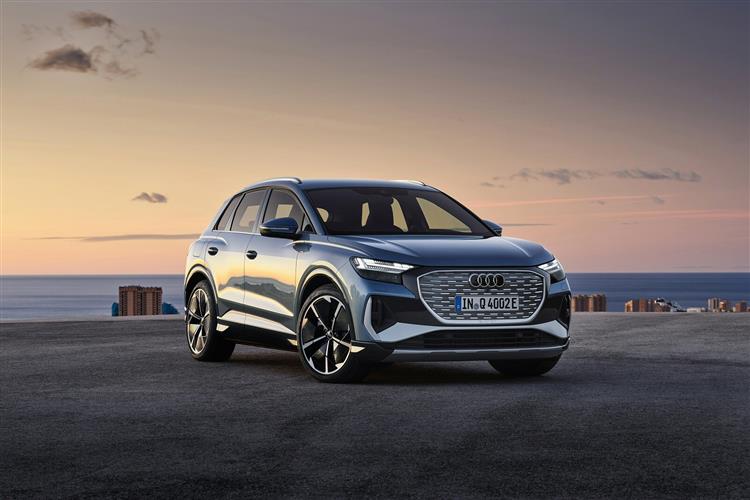 With the Q4 e-tron, Audi gets serious about EVs for the mass market. Jonathan Crouch takes a look.

With Audi's first three all-electric e-tron models, we saw what the brand was capable of with EV technology. These three models though - the e-tron, the e-tron Sportback and the e-tron GT quattro - were merely preludes to the BEV model that really matters to Ingolstadt, this car, the Q4 e-tron. It's tempting to merely dismiss this model as Audi's version of other similarly-sized VW Group crossover EVs like the Volkswagen ID.4, the Skoda Enyak iV and the CUPRA Born. Certainly, all the engineering bits that matter are common between the four cars, namely the MEB platform and the battery tech. Yet Audi claims to have put its own stamp on the way this car drives and feels. Let's see.

The Q4's pretty straightforward to get to grips with behind the wheel. You select drive using a slider-type shifter situated on the centre console and once underway, there's the kind of instant throttle response you'd usually get from an EV of this sort. In terms of powertrains, there's nothing we haven't seen before in Volkswagen Group EVs. Moist of these tend to be chosen with the 52kWh battery that's used by the base Q4 35 e-tron, which uses a 170PS rear-driven electric motor and makes 62mph in 9.0s and has a range of 208 miles. Next up is the Q4 40 e-tron, which has a bigger 77kWh battery and a more powerful 204PS rear-driven motor, making 62mph in 8.5s and offering a 316 mile driving range. The flagship Q4 50 e-tron also uses the 77kWh battery, but has both front and rear-mounted electric motors developing a combined 299PS. Which means 62mph in just 6.2s and a range of 295 miles. Plus, with this top performance variant, the top speed is lifted from the usual Q4 maximum of 99mph to 111mph. Across the range, there's the same kind of suspension set-up you'd find in other mid-sized Audi SUVs - a MacPherson strut front and five-link rear arrangement, with sports suspension available (which lowers ride height by 15mm) and adaptive damping offered further up the range.

You can't really see the Q4 e-tron as either an EV Q3 or an EV Q5 because its size dimensions don't fit with either of those two established combustion crossover models. As with those two cars, the Q4 comes in both regular SUV and swept-back coupe-style forms, the latter known as the Q4 Sportback e-tron. The regular model's dimensions (4,588mm long, 1,865mm wide and 1,632mm tall) place it neatly between a Q3 and a Q5 size-wise and visually, this car has its own bespoke look. This is the first of the company's models to get new digital LED technology that offers four different exterior lighting signatures the driver can choose between. And it's the first of Audi's smaller cars to get a full-width LED tail light bar at the back. Inside, the Q4 gets its own unique dashboard and cabin architecture, though this incorporates the company's usual screen technology. There's a 10.25-inch instrument display and a 10.1-inch central monitor, which can be upgraded to 11.6-inches on request. Premium materials are generously applied around the cabin and Audi's keen to highlight the extensive interior storage areas. To accommodate the battery, the back seat is mounted 70mm higher than the front. Boot space meanwhile, is rated at 520-litres, extendable to 1,490-litres when the 40:20:40-split seatback is lowered.

Prices sit in the £41,000-£65,000 bracket and there are four trim levels - 'Sport', 'S line', 'Edition 1' and 'Vorsprung'. That base price applied to the 52kWh 35 e-tron variant. The 40 e-tron derivative with the larger 77kWh battery you may well want prices from around £45,000. The top 50 e-tron 4WD model costs from around £51,500. Base 'Sport' variants get 19-inch Graphite Grey alloy wheels, those rims upgraded to 20-inches in size further up the range. A black styling package is a feature of the top-tier 'Vorsprung' models with their even more striking 21-inch wheels. Across the line-up, there's lots of sophisticated equipment available - much of it optional. Like the Matrix LED headlights with their 16 individually activated LEDs. And the bespoke Sonos sound system upgrade package. We'd also want to look at the optional heat pump, which rapidly heats and cools the interior using the thermal losses from the electric components and the temperature of the outside air. It uses eco-friendly CO2 as a refrigerant, which flows through the circuit at high pressure. The heat pump can reduce losses in range caused by usage of the climate control system, especially in winter. Its strengths come to the fore on long drives.

Using a conventional garage 7kW wallbox, you can recharge the base 52kWh Q4 35 e-tron model with 175 miles of charge in eight and a half hours. Maximum charging capacity is 7.4kW on an AC system - or 100kW using DC current. What about with the larger 77kWh battery of the Q4 40 e-tron and Q4 50 e-tron? Well those variants have been engineered for charging speeds of up to 11kW during AC charging and 125kW for DC charging. With such a rapid public charger, WLTP testing has confirmed that in only 10 minutes, the Q4 40 e-tron can recharge enough electricity to cover a distance of about 80 miles. Charging at 125 kW in ideal conditions, the battery can achieve an 80% state of charge from a 5% starting point in 38 minutes. If you're using a conventional 7kW garage wallbox, a Q4 40 e-tron can charge 255 miles of range in eight and a quarter hours. Using the myAudi app, owners can activate charging remotely using a smartphone. The app also provides access to the comfort remote preconditioning system, which enables remote adjustment of the cabin temperature and seat heating functions to ensure that the cabin climate is always comfortable well before a journey begins. Accessing and paying for electricity while on the road can be easily taken care of using the 'e-tron Charging Service', which provides UK subscribers with one RFID payment card that is accepted at a vast number of charge points operated by 18 suppliers across the UK and Europe, and offers a choice of two fixed price charging tariffs.

In surveying the VW Group MEB platform mid-sized SUV electric vehicles launched to date, we always felt that this Wolfsburg conglomerate was leaving room for an Audi model able to deliver this engineering with a touch more polish and driver-orientated luxury - and so it proves here. The Q4 e-tron has the size of a compact BEV, but the finish, luxury and (to some extent) the driving dynamics of an electric crossover from next class up - that for larger EV models like the Jaguar I-PACE and the Mercedes EQC. In that respect, it's far more like a BMW iX3 than a Volkswagen ID.4. If you're looking at those Jaguar, Mercedes or BMW models, we think you should be looking at a Q4 e-tron too because it'll satisfy you in much the same way. If that's your perspective, the premium prices being asked here will seem reasonable. If it isn't, you'll start to question just why a car which shares pretty much every significant aspect of its engineering with comparable Volkswagen, Skoda and CUPRA EVs can be worth so much more. A matter of perspective then. With Audi, it was ever thus.